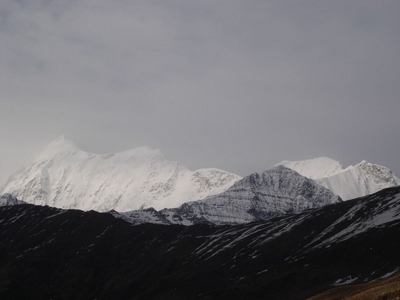 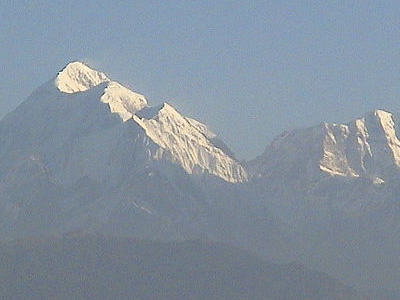 Trisul (Hindi: त्रिशूल) is a group of three Himalayan mountain peaks of western Kumaun, with the highest (Trisul I) reaching 7120m. The three peaks resemble a trident - in Hindi/Sanskrit, Trishula, trident, is the weapon of Shiva. The Trishul group forms the southeast corner of the ring of peaks enclosing the Nanda Devi Sanctuary, about 15 kilometres (9 mi) west-southwest of Nanda Devi itself. The main peak, Trisul I, was the first peak over 7,000 m (22,970 ft) to have ever been climbed, in 1907.

Description Of The Massif And Neighboring Peaks:
The three peaks are named Trisul I, Trisul II, and Trisul III. The massif is a north-south ridge, with Trisul I at the north end and Trisul III at the south. The massif runs roughly North-South, and hence appears compressed when viewed from the south (Ranikhet, Kausani), and more stretched out from the Southeast (Chamoli, Bedini Bugyal). Nanda Ghunti lies a few kilometers to the northwest, while Mrigthuni is just to the southeast.

Here's the our members favorite photos of "Peaks or Summits in Bageshwar". Upload your photo of Trisul!

Going to Trisul? Get answers from our friendly locals

Peaks or Summits in Uttarakhand

Peaks or Summits in India