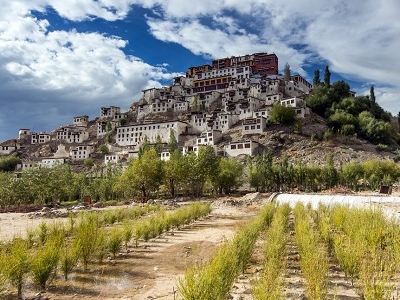 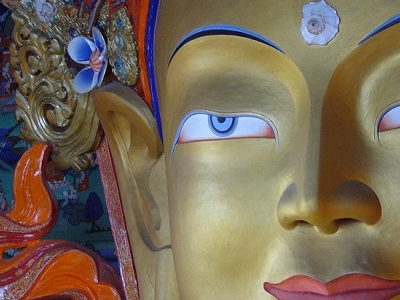 Thikse Gompa or Thikse Monastery is a Tibetan Buddhist monastery of the Yellow Hat (Gelugpa) sect, located on top of a hill, approximately 19 kilometres east of Leh in Ladakh, India. It is noted for its resemblance to the Potala Palace in Lhasa, Tibet and is the largest gompa in central Ladakh.

The monastery is located at an altitude of 3,600 metres (11,800 ft) in the Indus valley. It is a 12-storey complex and houses many items of Buddhist art such as stupas, statues, thangkas, wall paintings and swords. One of the main points of interest is the Maitreya (future Buddha) Temple which is installed to commemorate the visit of the 14th Dalai Lama to this monastery in 1970. A 15 metres (49 ft) high statue of Maitreya, the largest such statue in Ladakh, covering two storeys of the building is deified in the monastery. A nunnery is also part of the complex.

Maitreya Buddha
The statue of Maitreya Buddha at Thikse is two storeys tall.One of the main points of interest is the Maitreya (future Buddha) Temple erected to commemorate visit of the 14th Dalai Lama to this monastery in 1970. It contains a 15 metres (49 ft) high statue of Maitreya Buddha - the largest such statue in Ladakh covering two storeys of the building. He is unusually portrayed as seated in the lotus position rather than his usual representations as standing or in a sitting posture on a high throne. As the largest Buddha statue deified in the monastery, it took four years to craft. It was made by the local artists under the master Nawang Tsering of the Central Institute of Buddhist Studies (Leh) - in clay, gold paint and copper.

Assembly Hall
A wall at the entrance to the assembly hall or main prayer hall depicts murals of the Tibetan calendar with the Bhavacakra –the Wheel of Life. This wheel has insignia images of a snake, a bird and a pig that signify ignorance, attachment, and aversion. The purpose of this depiction is meant to remind that these earthly ties need to be overcome in order to get enlightenment in life and to prevent the cycle of death and rebirth.

Tara Temple
A temple is also dedicated to goddess Tara with her 21 images placed in glass-covered wooden shelves. Also, small shrines devoted to several guardian divinities including Cham-spring - the protector deity of Thikse - can also be seen between the main courtyard and the staircase. The Chi-khang has an image of the Buddha with two of his disciples and the deity Yamantaka. The courtyard mural depicts Tsong Khapa, the Buddha, Padmasambhava, Palden Lhamo and Mahakala.

Lamokhang Temple and Quarters
The top floor of the monastery houses the Lamokhang temple, which is a repository of numerous volumes of scriptures including Kangyur and Stangyur. Only men are allowed to enter this floor. There are big stupas and mani walls at the entry to the monastery. Jina, p. 320 A small room above the temple is exclusively used as a school room to teach local boys of the villages and some of these boys are chosen as Lamas. The top floor is also the official residence of the incarnate lama of the monastery. A large pillar engraved with the Buddha's teachings is also located here. The monastery complex has a number of white washed huts, which house the Lamas.

Festivals
The annual festival held in the monastery precincts is known as the Gustor ritual, which is held from the 17th to 19th day of the ninth month of the Tibetan calendar (October–November). Sacred dances such as the mask dance or Cham Dance are performed as a part of this ritual. Another special feature is the trade fair held at the base of the monastery, in which villagers from all over Ladakh assemble to barter and trade items and socialize. Sand mandalas are made for smaller festivals.

The morning prayers at 7 am, with synchronized chanting of the Buddhist sūtras at this monastery, attract many worshippers to observe the services. Facilities such as medical clinic, hotel & restaurant, souvenir shops and so forth are available at Thiksey. A fee of 20 rupees is charged for entry to the monastery.

Here's the our members favorite photos of "Monasteries in Ladakh". Upload your photo of Thiksey Monastery!

Going to Thiksey Monastery? Get answers from our friendly locals

Get in touch with 5 Touristlink members who want to visit Thiksey Monastery or with Sneha Gupta, Murti Shreyas and 5 others who already have been here.

Monasteries in Jammu and Kashmir