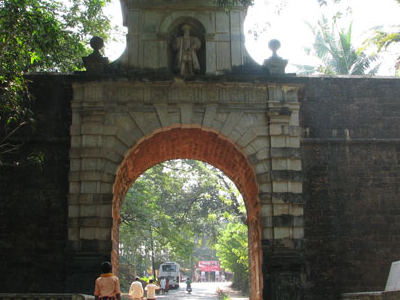 The Viceroy’s Arch is another important and ancient example of Goa’s pride. It was erected in 1599 by Viceroy Francisco da Gama (great grand son of Vasco Da Gama). This arch was once the main street for entering Old Goa. It was built in the memory of Vasco da Gama, the famous explorer, in order to pay tribute to his achievements.

In 1954 The Viceroy’s Arch was reconstructed with Vasco da Gama's figurine on the river side along with the sculpture of St. Catherine on the other side. It is also known to have been one of the gates of the Adil Shah’s Palace and is made of laterite. This ancient arch speaks the glory of Goa and is worth visiting as it gives a beautiful view of picturesque landscsape.

Here's the our members favorite photos of "Gateways in Old Goa". Upload your photo of The Viceroys Arch!

Going to The Viceroys Arch? Get answers from our friendly locals

Raj Francis is the only Touristlink member to visit The Viceroys Arch. Have you been here? Click here to save it.

Love gateways? Check these out;

Top Voted Gateways Around the World