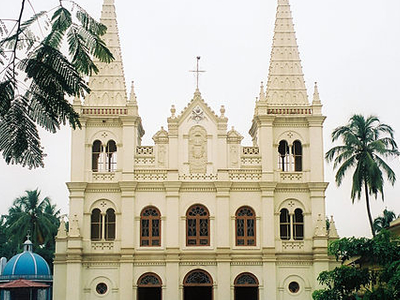 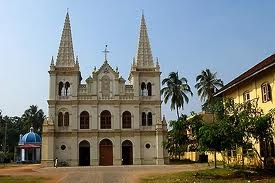 Save me
Been here
Want to go
Show on Map
Here to help 287 tour guides, 274 locals and 1 ambassador

The Santa Cruz Cathedral Basilica not only happens to be one of the oldest churches in Cochin, but also in the whole of India. It is one of the eight Basilicas in the country. Counted as one of the heritage edifices of Kerala, this church is one of the finest and impressive churches in India and visited by tourists the whole year round. It is a place of devotion as well as a center of historic significance, endowed with architectural and artistic grandeur and colours of the gothic style.

The basilica serves as the Cathedral church of the Diocese of Cochin, the second oldest Diocese of India. It is closely located to St. Francis Church. It was built originally by the Portuguese and elevated to a Cathedral by Pope Paul IV in 1558, was spared by the Dutch conquerors who destroyed many Catholic buildings. Later the British demolished the structure and Bishop D. João Gomes Ferreira commissioned a new building in 1887. Consecrated in 1905, Santa Cruz was proclaimed a Basilica by the Blessed Pope John Paul II in 1984. This magnificent church is a must see destination for tourists who come to Cochin.

History:
Portuguese Missionaries And Santa Cruz Church (1505-1558): The history of Santa Cruz Cathedral Basilica begins with the arrival of Portuguese missionaries along with the second Portuguese fleet under Pedro Álvares Cabral on 24 December 1500. The King Unni Goda Varma Tirumulpadu (Trimumpara Raja ) of Kingdom of Cochin received them very warmly. This caused the Zamorin of Calicut to declare war against Kingdom of Cochin. But the Portuguese army under Commander Dom Afonso de Albuquerque who reached Cochin in 1503, defeated the enemies of the King of Cochin and in return he gave them permission to build a fort in Kochi.

In 1505, Dom Francisco de Almeida the first Portuguese Viceroy got permission from the Kochi Raja to build a church edifice using stones and mortar which was unheard of at that time as the local prejudices were against such a structure for any purpose other than a royal palace or a temple. The foundation stone of the Santa Cruz church was laid on 3 May 1505, the feast day of the Invention of the Holy Cross, hence the magnificent edifice when completed was named Santa Cruz. This church was located on the eastern side of the present Children’s Park, Fort Cochin.

Raising To Cathedral And Demolition (1558-1795): In 1558, Pope Paul IV, raised the Santa Cruz Church to the status of a Cathedral along with the erection of the second diocese in India - Diocese of Cochin, suffragan (other being Diocese of Malacca) to the Archdiocese of Goa. The Dutch who conquered Cochin in 1663, destroyed all Catholic buildings. Only the St. Francis Church and the Cathedral escaped this fate. The Dutch made the cathedral their arms storehouse. Later it fell into the hands of the British who demolished it when they took over Cochin in 1795. One of the decorative granite pillars of the destroyed Cathedral is still kept as a monument at the southeastern corner of the present Basilica premises.

Erection Of The Present Day Santa Cruz Basilica (1886-Present): About 100 years later, Bishop D. João Gomes Ferreira (1887-1897), a missionary and the Bishop of Cochin, took initiative to re-erect the Cathedral and commenced the plan of its construction. But it was the next Bishop, Bishop D. Mateus de Oliveira Xavier (1897-1908) who completed the edifice. The cathedral was consecrated on 19 November 1905 by Bishop Dom Sebastião José Pereira, Bishop of Damao. Considering its antiquity, artistic dignity and historical importance, Blessed Pope John Paul II through a special Decree "Constat Sane Templum Sanctae Cruci" of 23 August 1984, raised the Santa Cruz Cathedral to the status of Basilica.

The church has two lofty spires and a remarkably bright, white-washed exterior and a pastel-colored interior. The interiors of the church are mostly Gothic, with the main altar decorated by the famous Italian painter Fra Antonio Moscheni, S.J., and his disciple De Gama of Mangalore. Unfortunately, Fra Antonio Moscheni died here on the 15 November 1905, four days before the newly-built Church was consecrated. The columns decorated with frescoes and murals, the seven large canvas paintings on the passion and death on the Cross, especially the painting of the Last Supper, modelled on the famous painting of Leonardo da Vinci and the beautiful stained glass windows add to the artistic grandeur of the place. The paintings that adorn the ceiling depict scenes from the Via Crucis of Christ.

Here's the our members favorite photos of "Churches in Kochi". Upload your photo of The Santa Cruz Basilica!

Going to The Santa Cruz Basilica? Get answers from our friendly locals

Get in touch with 2 Touristlink members who want to visit The Santa Cruz Basilica or with Oommen Nice, Renju Paul and 6 others who already have been here.