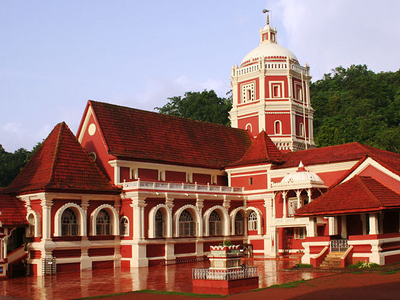 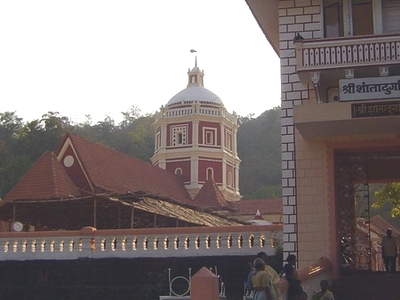 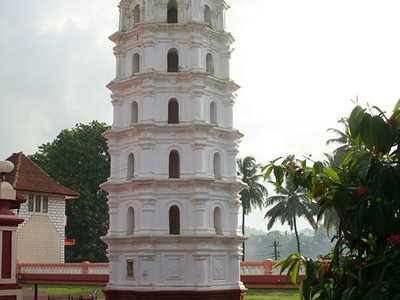 Shantadurga Temple is a large temple complex 33 km (21 mi) from Panaji at the foothill of Kavalem village in Ponda Taluka, Goa, India. A small laterite mud shrine was built and the deity was installed here. The mud-shrine was converted into a beautiful temple whose foundation stone was laid in 1730 and the temple was completed in 1738 and renovated in 1966.

Deity
The temple is dedicated to Shantadurga, the goddess who mediates between Vishnu and Shiva. The deity is also called 'Santeri' colloquially. This avatar of Shree Jagdamba Devi which had come to make peace (Shanti) between Shree Vishnu and Shree Shiva, came to be known as Shree Shantadurga Devi.

Local legends tell of a battle between Shiva and Vishnu The battle was so fierce that Lord Brahma prayed to Parvati to intervene, which she did in the form of Shantadurga. Shantadurga placed Vishnu on her right hand and Shiva on her left hand and settled the fight.

The deity of Shantadurga is shown as holding two serpents, one in each hand, representing Vishnu and Shiva. Apart from this battle, local legends often say that Shantadurga of Keloshi had gone to Sankhwal, a village in Salcette Taluka to kill a demon named Kalantak that was harassing the Brahmins. As a reward, she was given the name of Vijaya. Shri Vijayadurga shrine was located in Sankhwal along with Shri Shantadurga and Shri LakshmiNarsimha but was later shifted to a place called Kerim in Ponda Taluka during the Portuguese invasions.

The current temple was constructed during the reign of Maratha ruler Chatrapati Shahu Raje of Satara about 1738 A.D. Shri Naroram Mantri (Naroram Shenvi Rege) originally from Kochar village in the Vengurla region was a Mantri (minister) in the Chatrapati Shahu's Court around 1723 A.D. He obtained finances to construct the new temple for the Devi from the Chatrapati. The temple construction started around 1730 A.D. and, with the help from other mahajans, the present beautiful temple was completed. Due to his efforts the village Kavalem was bequeathed to the temple authorities by Shahu Maharaja in 1739 A.D.

Architectural Styles
It is a fusion of Indo-Portuguese architecture. Its pyramidical shape 'shikaras' rising on the roofs of the facade (entrance hall) and the 'Sabhamandap' (the main hall), its roman-arched windows, some of which have the stained-glass window panes of deep red, yellow, blue, green colours, its chandeliers, its gate posts, balustraded flat dome, the maroon-peach-white colour paint of the temple gives the temple a serene beautiful look. The highlight of the temple is its golden palanquin (palkhi) in which the deity is carried on festive occasions.

Here's the our members favorite photos of "Temples in Goa". Upload your photo of Shanta Durga Temple!

Going to Shanta Durga Temple? Get answers from our friendly locals

Prasanna S is the only Touristlink member to visit Shanta Durga Temple. Have you been here? Click here to save it.