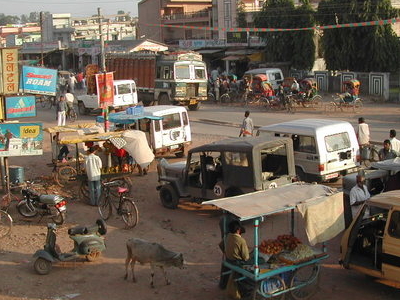 Save me
Been here
Want to go
Show on Map
Here to help 4 tour guides, 23 locals and 1 ambassador

Satna is a city in central India and a municipal corporation in Satna district in the Indian state of Madhya Pradesh. It is the administrative headquarters of Satna District. Satna is a border city of the state and is touched by the borders of the state of UttarPradesh.

Satna got its name from Sutna or Satna river flowing in its vicinity. It is said that this river got its name from the name of popular rishi called "Suteekshna Muni" of ancient times of Ramayana period (ref. "Satna Nagar" written by Shivanand). A long history is associated with this place. In the Hindu holy book of Ramayana Era Lord Rama stayed in the region of Chitrakoot, half of it is in the outskirts of Satna, shared with Uttar Pradesh, which contains the rest. It was previously a British station, the headquarters of the political agent for Baghelkhand. Political agent office was established in Satna in 1871 but was abolished in 1931. Nearby, at Bharhut, there are the remains of a 2nd century BC Buddhist stupa, first discovered in 1873 by Cunningham. However, most of the excavated remnants were sent to British Museum London by the then British rulers. To know the history of Satna town one may read the following books:

Going to Satna? Get answers from our friendly locals