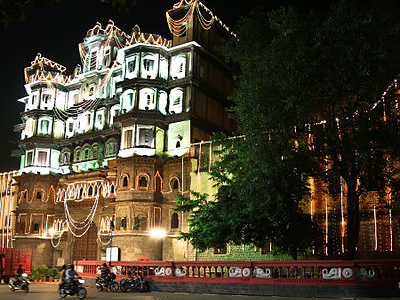 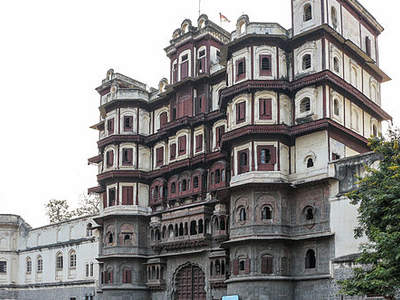 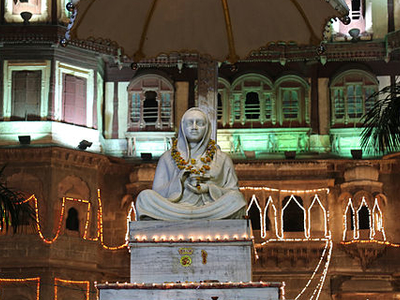 Rajwada is a historical palace in Indore city. It was built by the Holkars of the Maratha Empire about two centuries ago. This seven storied structure is located near the Chhatris and serves today as a fine example of royal grandeur and architectural skills.

Structure
The structure comprises two parts, the first one located at the heart of the city and the second one standing in the old part of the town. Rajwada palace exhibits a blend of Maratha and Mughal styles, the palatial structure is sure to leave you spellbound. The entrance itself is beautiful with lofty archway and a giant wooden door covered with iron studs. As one makes his way through the entrance, one is greeted with a courtyard comprising Mughal arched Ganesha hall, a number of balconies with Mughal ornamentation, windows, and corridors, surrounded by galleried rooms. The lower three floors are made of stone and the upper floors are made of wood.

The existing building is rectangular with cylindrical bastions at the four corners. It was constructed in 1766 and later the southern part was rebuilt in the years 1811-1833 after being damaged by fire. The Palace was constructed by the Muslim artisans from Mandu who worked for the Mughals but sought refuge in Malwa with their families, At that time only the Muslims were the most skilled crafts persons. These families lived in and around Indore and went on to work for several structures for the Holkars.

Today it stands proudly with its 7 story façade of carved stone and wood jails, jharokhas and chattries. The front bay has substantial forecourt assessed by a large fenestration in the front façade. All activity within this structure has been systematically removed and now boasts of a small office of the Joint Director, Archeology and Souvenir Shop run by the Archeology.

The rest of the building is ground and two floors. One side of the front bay has been destroyed as has the complete rear bay. The rear bay, before reconstruction was an empty shell with garden within, enveloped by the thick external wall with the bastions. The architecture is of the Maratha period & style. Planned with courtyards suited to tropical climes the Maratha architecture is known for its simplicity, visible visual logic & austere aesthetic, made rich by beautiful detailing, rhythm & repetition. The aisles & arcades, punctured by delicate niches, doors & windows create a space in which articulation of open, semi-open & covered areas is effortless and enchanting.

Here's the our members favorite photos of "Palaces in Indore". Upload your photo of Rajwada!

Going to Rajwada? Get answers from our friendly locals

Get in touch with 4 Touristlink members who want to visit Rajwada or with Jayant Tembhare, Mangesh Muley and 1 others who already have been here.