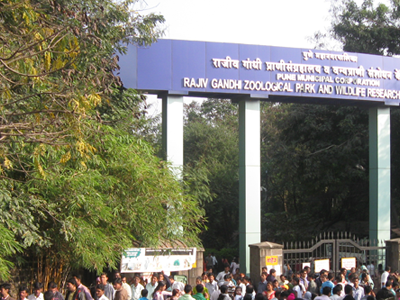 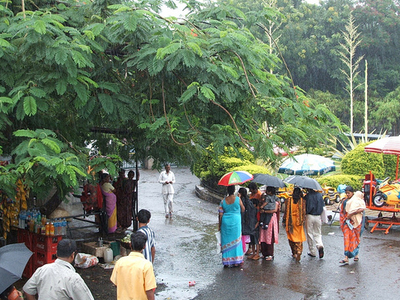 The Rajiv Gandhi Zoological Park, commonly known as the Rajiv Gandhi Zoo, is located in Katraj near the city of Pune in India. It is managed by the Pune Municipal Corporation. The 130-acre (53 ha) zoo is divided into 3 parts: an animal orphanage, a snake park, and a zoo, and includes a 42-acre (17 ha) lake (Katraj lake).

History
In 1953 the Pune Municipal Corporation created Peshwe Park on about 7 acres (2.8 ha) where Madhavrao Peshwe had established a private menagerie in 1770. Located in the heart of the city at the base of the Parvati hills, this zoo exhibited animals in traditional cages.

In 1986, Mr. Neelam Kumar Khaire (the first director of the park), with assistance from the Pune Municipal Corporation, created the Katraj Snake Park on land that was to become the Rajiv Gandhi Zoological Park.

In 1997, in order to create a more modern zoo in accordance with the guidelines of the Central Zoo Authority of India, the municipality selected a site in Katraj and started developing a new zoo. The zoo opened in 1999 as the Rajiv Gandhi Zoological Park & Wildlife Research Centre, and initially included only the reptile park, sambars, spotted deer, and monkeys. Although it took until 2005, all of the animals from Peshwe Park were eventually moved to the new site, and Peshwe Park was closed.

Animals
This zoo has good collection of reptiles, mammals, and some birds. The zoo has a white tiger and a male tiger named, "Tanaji". Other mammals at the zoo include leopard, sloth bears, sambhars, barking deer, black bucks, peafowl, monkeys, and elephants. Reptiles include Indian rock python, cobra, snakes, vipers, and Indian crocodiles. Amphibians such as Indian star tortoise also feature in the zoo.

The snake park has a large collection of snakes, reptiles, birds and turtles. There are over 22 species of snakes with 10 other species of reptiles comprising more than 150 individulas. This includes a Thirteen feet long King Cobra. Information about the snakes is provided in Braille, as well as more conventional formats, and the park includes a library. The snake park has organized many snake festivals and snake awareness programs to clarify doubts and destroy fears about this species. During Nagpanchami, the Katraj Snake Park at Pune arranges programs to discourage ill-treatment towards snakes.

Location
Slightly outside the city proper, the park is located along the Pune Satara Highway near the Bharati Vidyapeeth University. The park is 8 kilometers from Pune, close to the Katraj Bus Depot. Six seat auto rickshaws may be obtained from Swargate. The Site is not so far from swargate & hardly takes 10minutes from swargate to reach.

Here's the our members favorite photos of "Zoos in Pune". Upload your photo of Rajiv Gandhi Zoological Park!

Going to Rajiv Gandhi Zoological Park? Get answers from our friendly locals