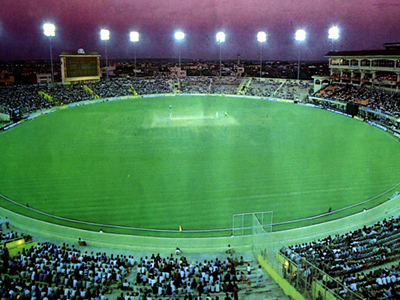 The Punjab Cricket Association Stadium is located at Mohali, just outside the city of Chandigarh. It is popularly referred to as the Mohali Stadium. The stadium is home to the Punjab team. Punjab's second international cricket stadium has been approved by BCCI in Bathinda, Punjab. The construction of the stadium took around INR 25 crore and 3 years to complete. The stadium has an official capacity of 30000 spectators. The stadium was designed by Arun Loomba and Associates, Panchkula.

The lights here are unconventional compared to other cricket stadiums, in that the light pillars are very low in height. This is to avoid aircraft from the nearby airport colliding with the light pillars.The stadium is the 19th and a relatively new Test cricket venue in India. The pitch has a reputation for being lively and supporting pace bowlers, however in recent days[when?] it has slowed down and assists spin bowling as well. It was inaugurated with a One Day International match between India and South Africa during the Hero Cup on 22 November 1993.

The first Test match here was held the following season, between India and West Indies on 10 December 1994. One of the most famous one-day matches on this ground was a thrilling Cricket World Cup semi-final encounter between Australia and West Indies in 1996. PCA stadium hosted 3 matches of 2011 world cup including the nail biting second Semi-final match between India and Pakistan on 30 March 2011 which was eventually won by India.PCA stadium is home of Kings XI Punjab (IPL Mohali franchisee).The current pitch curator for the PCA Stadium is Daljit Singh and the design consultant is Ar. Sufyan Ahmad.

Here's the our members favorite photos of "Stadiums in Mohali". Upload your photo of Punjab Cricket Association Stadium!

Aditya is the only Touristlink member to visit Punjab Cricket Association Stadium. Have you been here? Click here to save it.