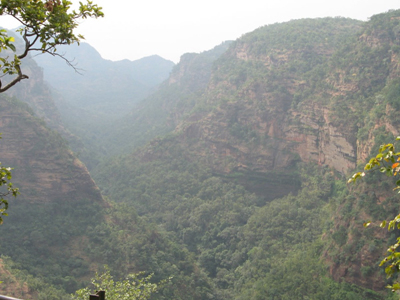 The Pachmarhi Biosphere Reserve is a conservation area in the Satpura Range of Madhya Pradesh state, India. It was created on March 3, 1999 by the Indian government and covers parts of Hoshangabad, Betul, and Chhindwara districts. The biosphere reserve's total area is 4926.28 km². It includes three wildlife conservation units: the Bori Sanctuary (518.00 km²), Satpura National Park (524.37 km²), and Pachmarhi Sanctuary (461.37 km²). Satpura National Park is designated as the core zone and the remaining area of 4401.91 km², including the Bori and Pachmarhi sanctuaries, serves as the buffer zone.

The reserve is mostly covered in forest. It is an important transition zone between the forests of western and eastern India; the forests are dominated by teak (Tectona grandis) but include the westernmost groves of sal (Shorea robusta), which is the dominant tree of eastern India's forests. Large mammal species include tiger, leopard, wild boar, muntjac deer, gaur (Bos gaurus), chital deer (Axis axis), sambar (Cervus unicolor), and rhesus macaques. Bison, Indian giant squirrel and flying squirrel are endemic fauna of this reserve.

Flora:
This reserve is best known for its rich forests. A part of the reserve vegetation has been studied by Prof. C.P. Kala, especially with respect to their indigenous uses and conservation perspectives. The reserve has several sacred groves, which are rich in plant genetic diversity and are composed of many ethnobotanically useful species, including wild edible fruits and medicinal plants. Ferns are found in plenty in this region. Other species of plants include tendu, mahua, wild mango, bamboo, etc.

Here's the our members favorite photos of "Nature Reserves near Pachmarhi". Upload your photo of Pachmarhi Biosphere Reserve!

Going to Pachmarhi Biosphere Reserve? Get answers from our friendly locals

Get in touch with 1 Touristlink members who want to visit Pachmarhi Biosphere Reserve or with Kaushal who already have been here.