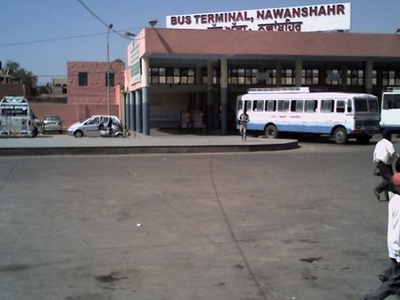 Nawanshahr is a city that became a district in 1995; now it is a municipal council in Shahid Bhagat Singh Nagar district in the Indian state of Punjab. It is the headquarters of Shahid Bhagat Singh Nagar District.Nawanshahr is a very fast-expanding city. It has one government hospital, many private hospital with new technology, and very good doctors from all professions. Nawanshahar has co-ed college, R.K. Arya, and one girls' college as well. S.N College, Banga is one of the best colleges in the area.

Recently,6th May, 2012, Krishna Kumar IAS (Deputy Commissioner, Nawanshahar 2005-07) was appreciated by actor Aamir Khan in his show Satyamev Jayate (http://www.satyamevjayate.in/) for his remarkable efforts in curbing female foeticide in Nawanshahar district. During his term as deputy commissioner, he was instrumental in increasing the sex ratio by 75 points in the district. This has been termed the "Nawanshahr Model" and is being used by other states to curb female foeticide. He has been widely appreciated for improving the quality of primary education in the state of Punjab during his stint as director general of Education, Punjab.

History:
The Ghorewaha Rajputs were propertiers or part propertiers of Rahon, Bhaddi, Jadla et al. Langroya is very famous village just five kilometers from Nawan Shahr. Their rule started in 1070 with Raja Hawaha Singh and held huge territories in Nawanshahr, Jallandhar, Ludhiana and Hoshirapur and continued as Raja of Machiwara till a long time.

Nawanshahr is said to have been built during the reign of Alauddin Khilji (1295-1316) by his Afghan military chief Nausher Khan. Previously it was called "Nausar" but, with the passage of time, the town came to be known as "Nawanshahr". Nausher Khan had constructed five forts known as havelis, whose remains still exist.

On September 27, 2008 in Khatkar Kalan 7 kilometres from Nawanshar, to honor freedom fighter Bhagat Singh, the Punjab government announced that a district in the state will be named after him. The announcement was made by Punjab Chief Minister Prakash Singh Badal at a function in the ancestral village of the martyr to mark his 101st birth anniversary. Nawanshahr district would be renamed as Shahid Bhagat Singh Nagar.

Here's the our members favorite photos of "Cities in Punjab". Upload your photo of Nawanshahr!

Going to Nawanshahr? Get answers from our friendly locals