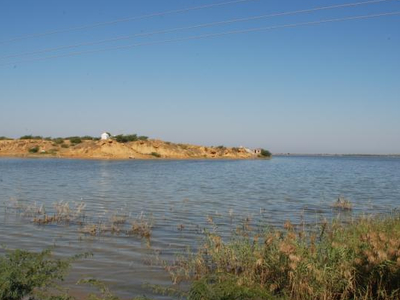 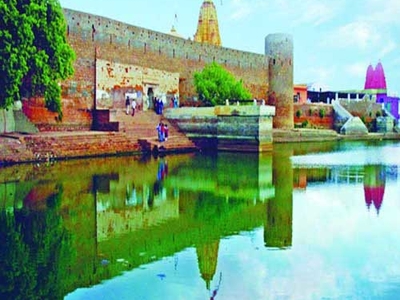 Narayan Sarovar is one of the most sacred pilgrimage sites for Hindus. It is located in Lakhpat taluka of Kutch District of Gujarat in India at a distance of about 210 km from Bhuj and ancient Koteshwar Temple lies only 4 km away from here. It is one of the five holy ponds in India mentioned in Shrimad Bhagvat Narayan Sarovar means the Lake of Narayan, a name for Vishnu.As per legends, one of the holy rivers of India, Sarasvati River had an out let in to sea near present day Narayan Sarovar and waters of lake were filled with holy waters of River Saraswati, that is why this place was and is still considered as one of the five holy lakes by Hindus.

In this place there are Vaishav temples of Shri Trikamraiji, Laxminarayan, Govardhannathji, Dwarkanath, Adinarayan, Ranchodraiji and Laxmiji. Queen of Rao Deshalji II of Kutch had built these temples. Devotee from all over India come to worship the lords here. The architecture is ancient and awe-inspiring.The temples of Lakshminarayan and Trikamray are built in same style as Dwarka temple.The other five temples were built by Vagheli Mahakunwar,queen of Rao Deshalji in decades of 1780-90 and more lately built temple of Kalyanray. Accommodation facilities are available for pilgrims.

According to Hindu theology, there are five sacred lakes collectively called Panch-Sarovar ('Sarovar' means "lake"). Namely, Mansarovar, Bindu Sarovar, Narayan Sarovar, Pampa Sarovar and Pushkar Sarovar.A fair is held here on the 11th to 15th days of month Kartik of the Hindu calendar (November/December).Here, you can see red antelopes or chinkaras and in year 1981 the area around was notified and named after Narayan Sarovar as Narayan Sarovar Sanctuary.

Here's the our members favorite photos of "Lakes in Gujarat". Upload your photo of Narayan Sarovar!

Going to Narayan Sarovar? Get answers from our friendly locals