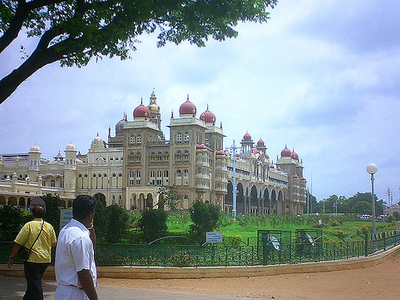 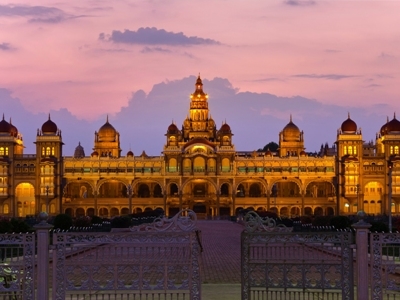 More Photos >
Save me
Been here
Want to go
Show on Map
Here to help 33 tour guides, 98 locals and 6 ambassadors

Mysore is the second-largest city in the state of Karnataka, India. Located at the base of the Chamundi Hills about 146 km (91 mi) southwest of the state capital Bangalore, it is spread across an area of 128.42 km2 (50 sq mi). According to the provisional results of the 2011 national census of India, the population of Mysore is 887,446 and Hinduism is its major religion. Mysore City Corporation is responsible for the civic administration of the city, which is also the headquarters of the Mysore district and the Mysore division.

Mysore is noted for its palaces, including the Mysore Palace, and for the festivities that take place during the Dasara festival when the city receives a large number of tourists. It lends its name to the Mysore style of painting, the sweet dish Mysore Pak, the Mysore Peta (a traditional silk turban) and the garment known as the Mysore silk saree. Tourism is the major industry, while information technology has emerged as a major employer alongside the traditional industries.

Mysore Airport also known as Mandakalli Airport is an airport serving the city of Mysore, Mysore depends on rail and bus transport for inter-city connections. The city was the location of the first private radio station in India. Mysore houses Mysore University, which has produced several notable authors, particularly in the field of Kannada literature. Cricket is the most popular sport in the city.

Economy:
Tourism is the major industry in Mysore. The city attracted about 3.15 million tourists in 2010. Mysore has traditionally been home to industries such as weaving, sandalwood carving, bronzework and the production of lime and salt. The planned industrial growth of the city and the state was first envisaged at the Mysore economic conference in 1911. This led to the establishment of industries such as the Mysore Sandalwood Oil Factory in 1917 and the Sri Krishnarajendra Mills in 1920.

Culture:
Referred to as the cultural capital of Karnataka, Mysore is well known for the festivities that take place during the period of Dasara, the state festival of Karnataka. The Dasara festivities, which are celebrated over a ten-day period, were first introduced by King Raja Wodeyar I in 1610. On the ninth day of Dasara, called Mahanavami, the royal sword is worshipped and is taken on a procession of decorated elephants, camels and horses. On the tenth day, called Vijayadashami, the traditional Dasara procession (locally known as Jumboo Savari) is held on the streets of Mysore.

An image of the Goddess Chamundeshwari is placed on a golden mantapa on the back of a decorated elephant and taken on a procession, accompanied by tableaux, dance groups, music bands, decorated elephants, horses and camels. The procession starts from the Mysore Palace and culminates at a place called Bannimantapa, where the banni tree (Prosopis spicigera) is worshipped. The Dasara festivities culminate on the night of Vijayadashami with a torchlight parade, known locally as Panjina Kavayatthu.

Tourism:
Mysore is a major tourist destination in its own right and serves as a base for other tourist attractions in the vicinity. The city receives large number of tourists during the 10-day Dasara festival. One of the most visited monuments in India, the Amba Vilas Palace, or Mysore Palace, is the centre of the Dasara festivities. The Jaganmohana Palace, the Jayalakshmi Vilas and the Lalitha Mahal are other palaces in the city. Chamundeshwari Temple, atop the Chamundi Hills, and St. Philomena's Church are notable religious places in Mysore.

The Mysore Zoo, established in 1892, and the Karanji and Kukkarahalli lakes are popular recreational destinations. Mysore has the Regional Museum Of Natural History, the Folk Lore Museum, the Railway Museum and the Oriental Research Institute. The city is a centre for yoga-related health tourism that attracts domestic and foreign visitors. Melody World is a museum showcasing wax statues and musical instruments. A short distance from Mysore city is the Krishnarajasagar Dam and the adjoining Brindavan Gardens, where a musical fountain show is held every evening. Places of historic importance close to Mysore are Srirangapatna, Somanathapura and Talakad. B R Hills, Himavad Gopalaswamy Betta hill and the hill stations of Ooty, Sultan Battery and Madikeri are close to Mysore.

Popular destinations for wildlife enthusiasts near Mysore include the Nagarhole National Park, the wildlife sanctuaries at Melkote and B R Hills and the bird sanctuaries at Ranganathittu and Kokrebellur. Bandipur National Park and Mudumalai National Park, which are sanctuaries for gaur, chital, elephants, tigers, Indian leopards and other threatened species, lie between 40 mi (64 km) and 60 mi (97 km) to the south. Other tourist spots near Mysore include the religious locations of Nanjanagud and Bylakuppe and the waterfalls at Shivanasamudra.

Here's the our members favorite photos of "Cities in Karnataka". Upload your photo of Mysore!

Going to Mysore? Get answers from our friendly locals