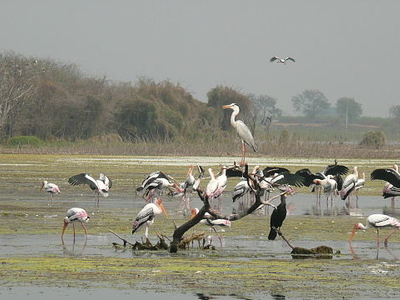 Dry Savannah type of vegetation is found in the sanctuary.The reservoir supports both submergent and emergent types of vegetation. The plant species of Typha, Ipomoea and Acacia cover the periphery of the waterline, while agricultural fields surround the reservoir and the river. Average temperature of the region is in the range of 15 °C to 42 °C. Average Rainfall of the region is 915 mm.

Flora And Fauna:
Flora:
The sanctuary is a freshwater ecosystem. The plant species of Typha, Ipomoea and Acacia cover the periphery of the waterline, while agricultural fields surround the reservoir and the river. Some of the major tree species found are Ipomea, Babool, Prosopis, Vallisneria, Eichornia, Reeds.

Fauna:
The sanctuary is a riverine habitat supporting Mugger crocodile and fresh water turtles. The sanctuary is home to prawns, molluscs, and fishes like catla, rohu, murrel, eel, karugu and chidwa . Among reptiles, monitor lizard, mugger crocodile, turtles and cobra are present. The Indian hare, wild boar, mongoose and jackal are also present.

Avifauna:
Around 73 species of birds are present in the sanctuary. A large flock of Common Teal and Cotton Pygmy-goose is found. Sometimes more than 1,500 Ruddy Shelduck are seen. Upstream of the Manjeera lake, a large number of cranes and barheaded geese. Fourteen species of birds breed in the sanctuary, some of them are: Darter, Asian Openbill, Painted Stork, Eurasian Coot and Black-crowned Night Heron.

In recent time the Vulnerable species Lesser Adjutant and Indian Skimmer have been spotted at the sanctuary. The Near Threatened species Darter, Painted Stork, Oriental White Ibis are also present in the sanctuary. Some of the other birds found in the sanctuary are : little egret, cormorant, pochard, spoonbill, Brahminy duck, pintail, kite, partridge, quail, peacock and open billed stork.

Park Specific Information:
The sanctuary has an Environmental Education Centre which consists of a museum, a library, and an auditorium. Films about birds and animals are shown daily. Boats are in operation to take the visitors around the sanctuary for bird watching. Binoculars and books on identification of birds are available to visitors. The best season to visit the sanctuary is from November to March when major migrant birds nest and breed here. Accommodation for visitors is available in inspection bungalows at Sangareddy, Singur and Sadasivapet.

Here's the our members favorite photos of "Wildlife Reserves in Hyderabad". Upload your photo of Manjira Wildlife Sanctuary!

Going to Manjira Wildlife Sanctuary? Get answers from our friendly locals