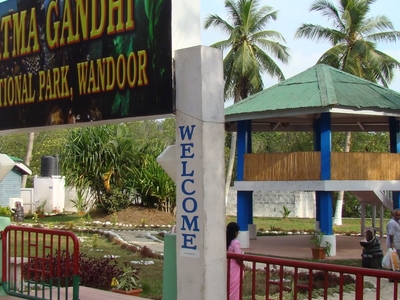 The Mahatma Gandhi Marine National Park spans over a 281.5 square kilometer area of the Bay of Bengal around the west coastal belt of the Wandoor region of South Andaman. Situated 29 kilometers to the south-west of Port Blair, it is made up of a group of 15 islands and the open sea creeks running through this area. This region was ear-marked as a National Park in the year 1983 under the Wildlife Protection Act to protect the marine life such as the Corals, and the nestling Sea Turtles which are prevalent in this area.

Although most of these islands are inhabited, population is located within the 8 nearby coastal villages. The Mahatma Gandhi Marine National Park has opened up a whole lot of chance for eco-tourism on these islands with the necessary planning and promotion methods. Most of this area is dotted with islands and islets within a visual distance from each other. These rocky islands are normally covered with mangroves or tropical forests, along with open rock-faces and shallow beaches. This region includes vast stretches of enchanting marine waters, bushy flora covered islands, magnificent coral reefs along sparkling sandy beaches and mangroves.

Home to a rich and undisturbed marine life consisting of a variety of Coral Reefs, flocks of Fishes in all sizes and colors, Mollusks, Shells, Star-Fish, Turtles, Salt Water Crocodiles and a host of other marine life. The avifauna found here include the White-Bellied Sea Eagle, Parakeets, Andaman Teal, Heron, Terns, Waders, Swifts and many others.

The Mahatma Gandhi Marine National Park has many excellent locations for snorkeling and scuba-diving and has got everything that it takes to become a tourist hotspot. Wandoo Village which is 30 kilometers to the south-west of Port Blair City is the entry point to the Marine Park, and which also manages to maintain a few Glass Bottom Boats for tourists on demand. October to May is the best time to be here, sensibly avoiding the drenched monsoon season.

Sea Turtles:
The Mahatma Gandhi Marine National Park is a major nestling ground for the Sea Turtles with most of these species listed as either threatened or endangered. Modernization & Beach Development is a major threatening factor contributing for the reducing populations of the Sea Turtles. Beaches & dunes form a fragile ecosystem which depends upon vegetation to protect against erosion. Every year Sea Turtles lay countless eggs on the beaches, most of which are wasted and ultimately end up to become a part of the nutrient source for dune vegetation. With a life span of 80 years, a Sea Turtle almost takes decades to mature and come to a reproductive age.


Ecosystems:
Most of the coral reefs in the park are fringing reefs. The type and composition of vegetation varies from island to island. Most notably there you can see a difference between the tourist islands which suffer more anthropocentric change and others which do not. There are also some islands more isolated or protected from the effects of weather in the Bay of Bengal. Tarmugli, the largest island, is covered with thick mangrove vegetation, sand covered beaches, uprooted trees and sheet rocks. Twins is an important breeding ground for turtles within the park.

Here's the our members favorite photos of "National Parks in Andaman and Nicobar". Upload your photo of Mahatma Gandhi Marine National Park!