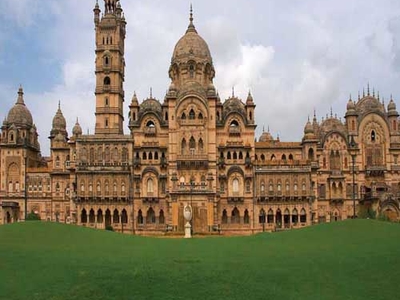 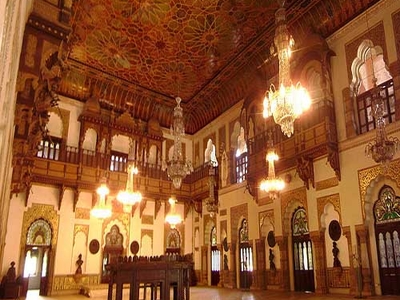 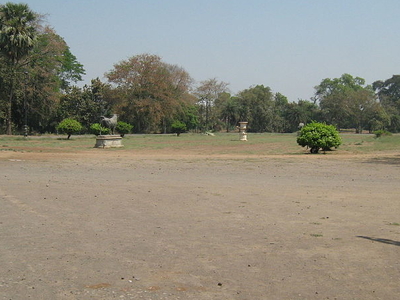 The term Maharaja Palace actually refers to a series of palaces in Vadodara,Gujarat, India, constructed since the Gaekwad a prominent Maratha family started ruling the Baroda State. The first one was a building known as the Sarkar Wada. This building, not really a palace, was given up for the Nazarbaug Palace built in old classical style. After this the Lakshmi Vilas Palace, an extravagant building of the Indo-Saracenic school, was built by Maharaja Sayajirao Gaekwad III in 1890 at a cost of GBP180,000. Major Charles Mant was the architect.

Overview
It is reputed to have been the largest private dwelling built till date and four times the size of Buckingham Palace. At the time of construction it boasted the most modern amenities such as elevators and the interior is reminiscent of a large European country house. It remains the residence of the Royal Family, who continue to be held in high esteem by the residents of Baroda.

Its ornate Darbar Hall, which is sometimes the venue of music concerts and other cultural events, has a Venetian mosaic floor, Belgium stained glass windows and walls with intricate mosaic decorations. Outside of the Darbar Hall is an Italinate courtyard of water fountains. The palace houses a remarkable collection of old armoury and sculptures in bronze, marble & terracotta by Fellici. The grounds were landscaped by William Goldring, a specialist from Kew Gardens. The palace is open to the public and an audio tour is available.

The Palace "compound" covers over 700 acres (2.8 km sq) and houses a number of buildings, particularly the Moti Baug Palace and the Maharaja Fateh Singh Museum building. Packs of langoors & peacocks can also be spotted around the palace compound. The Museum building was constructed as a school for the Maharaja's children. Today a large number of works of art belonging to the Royal family have been displayed in the museum. The most remarkable of these is the fabulous collection of the paintings of Raja Ravi Varma, who was specially commissioned by the then Maharaja of Baroda. The collection includes portraits of the Royal family in addition to the paintings based on Hindu mythology for which Raja Ravi Varma was famous.

Sports
Variety of sporting activities can be performed within the palace compound itself! Adjacent to the Motibaug Palace and the Museum is the Moti Bagh Cricket Ground, the offices of the Baroda Cricket Association, and a very rare indoor teak floored tennis court and badminton court (where the All India Badminton Championships were previously held). There are also two clay tennis courts plus a derelict fives court.

Here's the our members favorite photos of "Palaces in Vadodara". Upload your photo of Laxmi Vilas Palace!

Going to Laxmi Vilas Palace? Get answers from our friendly locals

Get in touch with 2 Touristlink members who want to visit Laxmi Vilas Palace or with Prasanna S who already have been here.