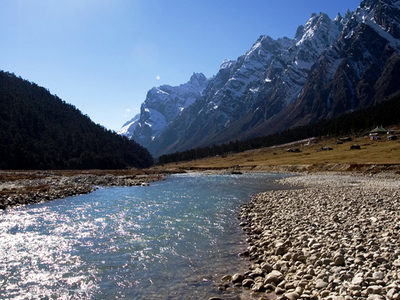 Lachen River is a tributary of the Teesta River. The river is at an elevation of 9022 feet (2750 m) and is famous for the vast orchards of apple and scenic beauty. The plantations and the ethereal alpine valleys make Lachen an out of the World experience. The Lachen river is no more than a narrow hill stream in the Northern extremes of the state of Sikkim, in India. It is also a major tributary of River Teesta, the most important river in Sikkim along with River Rangeet.
The Lachen area is also the starting point to some of North Sikkim’s most interesting treks. Gurudongmar and Chopta Valley are must for any tourist. Lachen also serves as the base camp to some of North Sikkim’s most interesting treks. Set at an elevation of 2750 meters (9022 feet), slightly higher than that of Lachung, Lachen too has its apple orchards and alpine views.

Here's the our members favorite photos of "Rivers near Lachen". Upload your photo of Lachen River!

Going to Lachen River? Get answers from our friendly locals

Connect with Virendra Bandekar and Asher Travel who have already visited Lachen River.