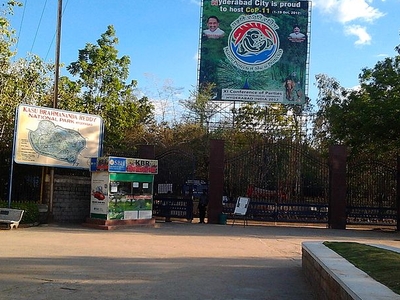 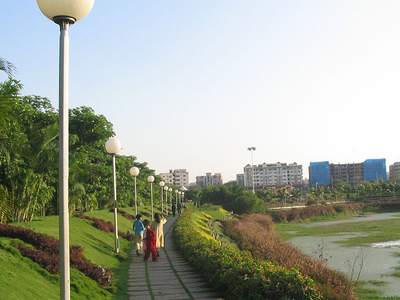 Save me
Been here
Want to go
Show on Map
Here to help 185 tour guides, 1,200 locals and 1 ambassador

Kasu Brahmananda Reddy National Park (Telugu: కాసు బ్రహ్మానంద రెడ్డి జాతీయ వనం), is a national park located in Jubilee Hills in Hyderabad, Telangana, India. The park has an approximate area of 390-acre (1.6 km sq). The park also houses the famous Chiran Palace, a 24-acre (0.097 km sq) palace complex. It is located centrally in Jubilee Hills and is described as a jungle amidst the concrete jungle.

History
Chiran Palace was built in 1960. The entire palace complex is spread over an area of 400 acre and was given to Prince Mukarram Jah on his coronation by his father Prince Azam Jah in 1967. The complex has the palace and besides it the other property include Mor (peacock) bungalow on a hillock, Gol Bungalow; stables for elephant, horses and cattle, motor khana that housed a fleet of exquisite vintage cars, a workshop for heavy machinery, petrol pump, several outhouses, two wells and an equal number of water tanks.

National park status
The entire palace complex area was declared as a National park by the Andhra Pradesh state government after getting permission from the central government in the year 1998. This gave control of major part of the land to the forest department and the Nizam was left with the control of only about 11 acres.As the time passed the control of the Nizam was further reduced to the present less than six acre. Further the park was renamed to Kasu Brahmananda Reddy National Park with only the palace building being referred to as Chiran palace.

In June 2010 the Prince and his representatives reached an agreement with the state government to exchange Chiran Palace and 16 other pieces of his property scattered over the national park with six acres of land on the north-west corner of the park. This land would not be considered the part of the National park and thus will not provide access to forest officials and visitors to the park. All the properties on the land, including the Chiran palace would be notified as part of the national park and the land to be handed out to the prince was struck out of the park.

The Palace
The Chiran Palace, unlike the other palaces of the Nizam like Falaknuma or Chowmohalla, is a modern facility designed to serve the needs of the prince. It is not a palace in the traditional sense of the term. It is more like a big villa constructed on 6,000 sq metres of land.

The duplex type palace has two cellars where the prince had his billiard room along with a large conference hall. The ground floor contains an armory hall, two guest rooms in addition to his office, place for visitors, pantry and kitchen etc. The first floor comprises seven bed rooms where the Nizam lived with his wife and children.

The Park
The park provides an excellent lung space and environment from the busy city life and rising pollution levels. The park has over 600 species of plant life, 140 species of birds and 30 different varieties of butterflies and reptiles. Some of the animals making their home in the park include: pangolin, small Indian civet, peacock, jungle cat and porcupines. There are few water bodies present in the park providing the needed moisture for the plants and quenching the thirst of birds and small animals.

Here's the our members favorite photos of "National Parks in Hyderabad". Upload your photo of Kasu Brahmananda Reddy National Park!