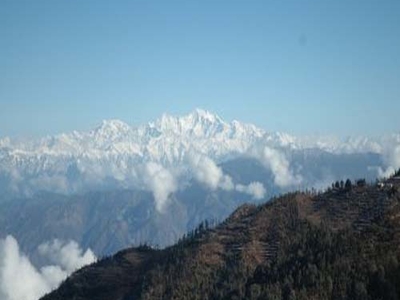 Kanatal is a city in Uttarakhand, 78 km ahead of Dehradun (Capital of State Uttarakhand), 38 km ahead of Mussoorie which is also known as the Queen of Hills & 12 km from Chamba. Kanatal is a hamlet built around numerous hills, a locale which personifies the romantic aura of Tehri District, Uttarakhand, State. Located on the Chamba-Mussoorie highway. With a spectacular view of the snow covered hills and the green forests, Kanatal, Uttarakhand welcomes a large number of visitors every year. Kanatal is situated nearly 300 km far from Delhi at an altitude of over 8500 feet (2590 meters). By virtue of the natural beauty of this place Kanatal allures many tourists every year.

History:
Few years back there used to be a lake by the name of Kanatal, now it doesn’t exist . To make it memorable, the place was named Kanatal. Surkunda Devi is a very sacred temple in Kanatal, dedicated to Sati Ji; Kanatal is the place where Shankar Ji brought her dead body on his trishul from Haridwar. Located at a height of 9995 feet, you get a 360 degree view from the top of the temple. This temple is located 8 km on the road towards Mussoorie to Kaddukhal. One has to trek 2 km on foot to the little temple. Ponies are also available here.

Known for its mesmerizing beauty, beautiful sights, verdant forests, invigorating winds and tranquil weather, Kanatal presents a perfect getaway from Delhi. It’s a small little town near Mussoorie, relatively unknown to the outside World. Easily accessible by road, train or even by air it provides the perfect retreat from the hassles of daily life - a perfect place to have a word with nature in its purest form. Kanatal is a hill station where one feels a sense of calmness. One will not find any bustling shopping malls, people hurrying for work, commercialization and destruction of natural beauty here. Kanatal shows us why Robert Frost wrote so many poems about nature.

Climate:
A pleasant and relaxing weather throughout the year, Kanatal is lovely weekend getaway from the scorching heat, humidity and pollution laden atmosphere of the metro cities. The temperature here hovers between 10-20 degrees Celsius in summers. In winters, it presents a mesmerizing sight of snow carpeted grounds and trees presenting a white wonderland& temperature lies in between 5-10 degrees. A traveller may spend his day lazing around, going for a walk, playing cards or chess, enjoying small picnics, photography, meditation or yoga. One can think of many creative ways to spend the days here in leisure.

Kanatal at an altitude of 2590 meters above sea level, has a few hotels, which offer the spectacular view of the majestic snow covered hills like Trishul, Chaukhamba and Bandarpuch. Some of the premium stay options in Kanatal include Kanatal Resort & Spa and The Terraces, Budget hotel includes The Hermitage & Lavasta. Some camps like Camp carnival.

Accessibility:
Kanatal is conveniently connected by road to Delhi and major cities. The closest railway station & airport is Dehradun. Taxis are easily available for Kanatal. Throughout the year is the best time to visit because in summers you can stay away from heat & in winters enjoy snowfall there.

Recommended Food & Restaurants In Kanatal:
Kanatal being a remote hill station is still untouched by urbanisation, so one does not find any fast food joints and restaurants here. The only restaurants you find here are the ones in the resort and hotels. These restaurants serve mostly multi-cuisine or north Indian food. The beauty of the place will compel you to visit the place over and over again.

Here's the our members favorite photos of "Hill Stations in Uttarakhand". Upload your photo of Kanatal!

Going to Kanatal? Get answers from our friendly locals

Get in touch with 12 Touristlink members who want to visit Kanatal or with Abhishek Shah, Lalit Kumar and 24 others who already have been here.