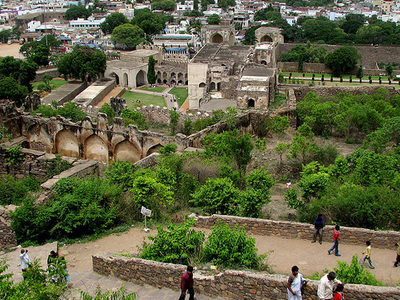 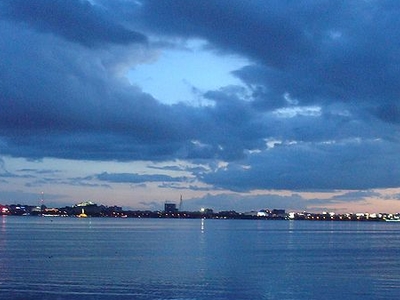 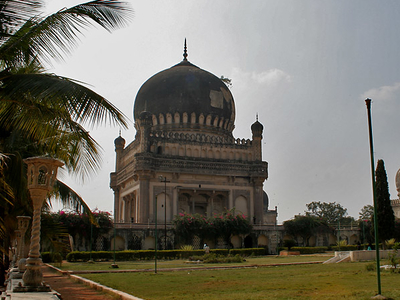 More Photos >
Save me
Been here
Want to go
Show on Map
Here to help 185 tour guides, 1,200 locals and 3 ambassadors

Hyderabad (ˈhaɪdərəˌbæd/ HY-dər-ə-bad; often /ˈhaɪdrəˌbæd/) is largest city of the state of Telangana. It is also the common capital of both the southern Indian states of Andhra Pradesh[A] and Telangana. Occupying 650 square kilometres (250 sq mi), along the banks of the Musi River, it has a population of about 6.8 million and a metropolitan population of about 7.75 million, making it the fourth most populous city and sixth most populous urban agglomeration in India. At an average altitude of 542 metres (1,778 ft), much of Hyderabad is situated on hilly terrain around artificial lakes, including Hussain Sagar—predating the city's founding—north of the city centre.

Established in 1591 by Muhammad Quli Qutb Shah, Hyderabad remained under the rule of the Qutb Shahi dynasty for nearly a century before the Mughals captured the region. In 1724, Mughal viceroy Asif Jah I declared his sovereignty and created his own dynasty, also known as the Nizams of Hyderabad. The Hyderabad State ultimately became a princely state during British rule, and remained so for 150 years, with the city serving as its capital.

The city continued as capital of a new Hyderabad State after joining the Indian Union in 1948 and before attaining its current status as the focal point of Andhra Pradesh in 1956. In 2014, Andhra Pradesh state was bifurcated and the city became the capital and a part of newly formed Telangan state, while it will share the status of joint capital along with the Andhra Pradesh for a limited time of ten years from then.

History
Toponymy
The name Hyderabad means "Hyder's abode" or "lion city", derived from the Persian/Urdu words "haydar" or "hyder" (lion) and "ābād" (city or abode). According to John Everett-Heath, the author of Oxford Concise Dictionary of World Place Names, Hyderabad was named to honour the Caliph Ali Ibn Abi Talib, who was also known as Hyder because of his lion-like valour in battles. One popular theory suggests that Muhammad Quli Qutb Shah, the founder of the city, named it "Bhaganagar" or "Bhāgnagar" after Bhagmati, a local nautch (dancing) girl with whom he had fallen in love.

She converted to Islam and adopted the title Hyder Mahal. The city was renamed Hyderabad in her honour. According to another source, the city was named after Haidar, the son of Quli Qutb Shah. Andrew Petersen, a scholar of Islamic architecture, says the city was originally called Baghnagar (city of gardens).

Early and medieval history
Archaeologists excavating near the city have unearthed Iron Age sites that may date from 500 BCE. The region comprising modern Hyderabad and its surroundings was known as Golkonda ("shepherd's hill"), and was ruled by the Chalukya dynasty from 624 CE to 1075 CE. Following the dissolution of the Chalukya empire into four parts in the 11th century, Golkonda came under the control of the Kakatiya dynasty (1158–1310), whose seat of power was at Warangal, 148 km (92 mi) northeast of modern Hyderabad.

Landmarks
Heritage buildings constructed during Qutb shahi and Nizam eras showcase Indo-Islamic architecture influenced by Medieval, Mughal and European styles. After the 1908 flooding of the Musi River, the city was expanded and civic monuments constructed, particularly during the rule of Mir Osman Ali Khan (the VIIth Nizam), whose patronage of architecture led to him being referred to as the maker of modern Hyderabad. In 2012, the government of India declared Hyderabad the first "Best heritage city of India".

Qutb Shahi architecture of the 16th and early 17th centuries followed classical Persian architecture featuring domes and colossal arches, The oldest surviving Qutb Shahi structure in Hyderabad is the ruins of Golconda fort built in the 16th century. The Charminar, Mecca Masjid, Charkaman and Qutb Shahi Tombs are other existing structures of this period. Among these the Charminar has become an icon of the city; located in the centre of old Hyderabad, it is a square structure with sides 20 metres (66 ft) long and four grand arches each facing a road.

At each corner stands a 56 metres (184 ft) minaret. Most of the historical Bazaars that still exist were constructed on the street north of Charminar towards Golconda fort. The Charminar, Qutb Shahi tombs and Golconda fort are considered to be monuments of national importance in India; in 2010 the Indian government proposed that the sites be listed for UNESCO World Heritage status.

Culture
Hyderabad emerged as the foremost centre of culture in India with the decline of the Mughal Empire in Delhi in 1857 AD. The migration of performing artists to the city particularly from the north and west of the Indian sub continent, under the patronage of the Nizam, enriched the cultural milieu. This migration resulted in a mingling of North and South Indian languages, cultures and religions, which has since led to a co-existence of Hindu and Muslim traditions, for which the city has become noted.

A further consequence of this north-south mix is that both Telugu and Urdu are official languages of Telangana. The mixing of religions has also resulted in many festivals being celebrated in Hyderabad such as the Ganesh Chaturthi, Diwali and Bonalu of Hindu tradition and the Eid ul-Fitr and Eid al-Adha by Muslims.

Art and handicrafts
The region is well known for its Golconda and Hyderabad painting styles which are branches of Deccani painting. Developed during the 16th century, the Golconda style is a native style blending foreign techniques and bears some similarity to the Vijayanagara paintings of neighbouring Mysore. A significant use of luminous gold and white colours is generally found in the Golconda style. The Hyderabad style originated in the 17th century under the Nizams. Highly influenced by Mughal painting, this style makes use of bright colours and mostly depicts regional landscape, culture, costumes and jewellery.

Here's the our members favorite photos of "Cities in Telangana". Upload your photo of Hyderabad!

Going to Hyderabad? Get answers from our friendly locals