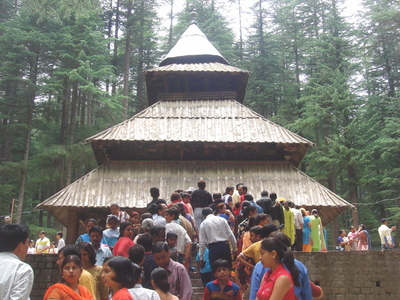 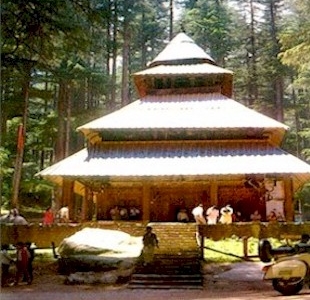 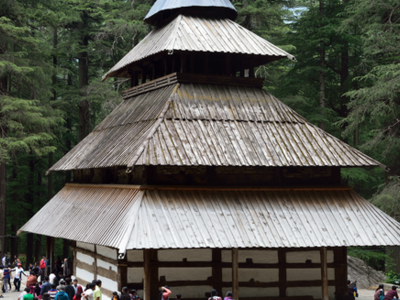 Hidimbi Devi Temple, also known variously as the Hadimba Temple, is located in Manāli, a hill station in the State of Himāchal Pradesh in north India.It is an ancient cave temple dedicated to Hidimbi Devi, sister of Hidimba, a figure in the Indian epic Mahābhārata. The temple is surrounded by a cedar forest at the foot of the Himālayas. The sanctuary is built over a huge rock jutting out of the ground which was worshipped as an image of the deity. The structure was built in 1553.

Mythology:
The Hidimba Devi temple is built around a cave where Hidimba performed meditation. Hidimba was supposed to have lived there with her brother Hidimb, and not much is known about their parents. Born into a Rakshas family, Hidimba vowed to marry one who would defeat her brother Hidimb, who was supposed to be very brave and fearless. During the Pandava's exile, when they visited Manali; Bhima, one of the five Pandavas, killed Hidimb. Thereafter, Hidimba married Bhima and gave birth to their son Ghatotkacha.

A Mahabharat Narration:
The Indian epic Mahabharata narrates that the Pāndavas stayed in Himachal during their exile. In Manali, the strongest person there, named Hidimba and brother of Hidimdi, attacked them, and in the ensuing fight Bhima, strongest amongst the Pandavas, killed him. Bhima and Hidimba's sister, Hidimbi, then got married and had a son, Ghatotkacha, (who later proved to be a great warrior in the war against Kauravas). When Bhima and his brothers returned from exile, Hidimbi did not accompany him, but stayed back and did tapasyā (a combination of meditation, prayer, and penance) so as to eventually attain the status of a goddess.

Here's the our members favorite photos of "Temples near Manali". Upload your photo of Hadimba Devi Temple!

Going to Hadimba Devi Temple? Get answers from our friendly locals

Get in touch with 8 Touristlink members who want to visit Hadimba Devi Temple or with Vizagexecutives Raman, Aakash Garg and 25 others who already have been here.