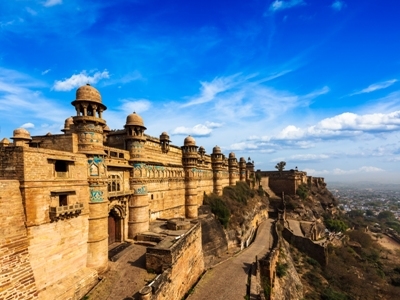 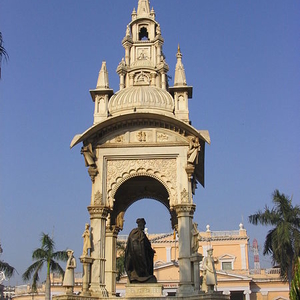 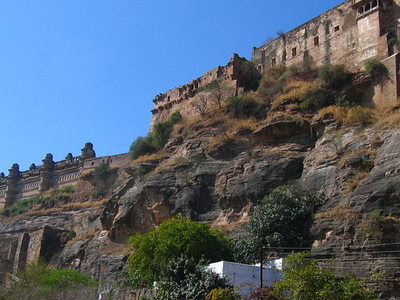 More Photos >
Save me
Been here
Want to go
Show on Map
Here to help 35 tour guides, 120 locals and 3 ambassadors

Gwalior is a city in Madhya Pradesh, India, lying 122 kilometres (76 mi) south of Agra, and 423 kilometres (263 mi) north of Bhopal, the state capital. Gwalior occupies a strategic location in the Gird region of India, and the city and its fortress have served as the center of several of historic northern Indian kingdoms. Gwalior is the administrative headquarters of Gwalior district and Gwalior division. It is famous for Gwalior Fort, which has changed hands many times. From the Tomaras in the 8th century, it passed to the Mughals, then the Marathas under the Scindias (1754).

Gwalior Fort:
At the heart of Gwalior is Gwalior Fort, improved by Raja Man Singh Tomar where a previous structure existed, of the Tomar dynasty. This formidable structure was reputed to be one of the most structurally sound forts of India. It occupies an isolated rock outcrop. The hill is steepened to make it virtually unscalable and is surrounded by high walls which enclose buildings from several periods. The old town of Gwalior lies at the eastern base of the fortress. Lashkar, formerly a separate town that originated as a military camp, lies to the south, and Morar, also a formerly separate town, lies to the east. Gwalior, Lashkar and Morar are presently part of the Gwalior Municipality.

Art and culture:
Gwalior is a well acknowledged place of art, associated with historic as well as contemporary evidence. In August 2005 a mural created by Aasutosh Panigrahi and five other artists was acknowledged as the World's Largest Indoor Mural by Guinness World Records. Marathi Sahitya Sammelan, the conference on Marathi Literature were held once in Gwalior City. It was presided by President of the Conference writer Kusumavati Deshpande (and wife of Kavi Anil) in 1961. She was the first female president of the annual Sammelan since its inception in 1878. Culturally Gwalior is the confluence of two rich cultures Bundeli and Braj. Bundelkhand covers Gwalior, Bhind, Morena, Sagar, Shivpuri, Guna, Sheopur and adjoining areas.

Ganesh Chaturthi is celebrated in a unique way in Gwalior City. People of Gwalior arrange a carnival of floats (known as "Jhanki" in the local Hindi language) in various places of the city. Gwalior also celebrates Rang Panchami quite differently. This festival is celebrated five days after Dulendi or Holi. This is also celebrated like Dulendi, but colors are mixed with water and then either sprinkled or poured on others. Makar Sankranti is a 'Kite Festival' on 14 January each year; people fly kites and compete to cut each other's kites in the sky.

Places of interest:
Jai Vilas Mahal is the residential palace turned museum of Scindias in the heart of the city. The palace has notable collections of antiques and also some of the old time gadgets and collections that can't be easily seen.The museum is one of the largest in Madhya Pradesh and has the world's largest chandelier and the complex is a mixture of British as well as Hindu architecture. The palace was made in 1874 as an attempt to bring the palace of Versailles to Gwalior and the Jai Vilas Palace was a successful attempt.

Gwalior trade fair was started in 1905 by Maharaja Madho Rao, king of Gwalior. It has become the biggest fair of Madhya Pradesh and, indeed, one of the most colorful fairs of India. It starts in the second week of January and continues until February.

Gwalior Zoo (Gandhi zoological Park)- This is one of the most lively and beautiful zoological parks of Madhya Pradesh. Its main attractions include Jamuna, a white tiger, serpents, golden pheasants, sambhar, hyena, bison, and others.

Here's the our members favorite photos of "Cities in Madhya Pradesh". Upload your photo of Gwalior!

Going to Gwalior? Get answers from our friendly locals