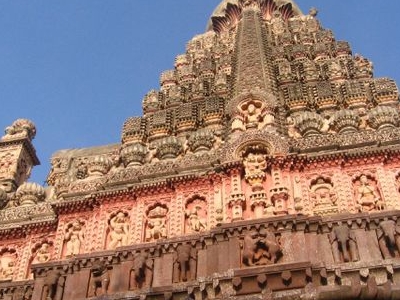 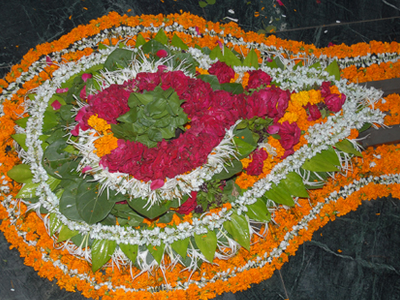 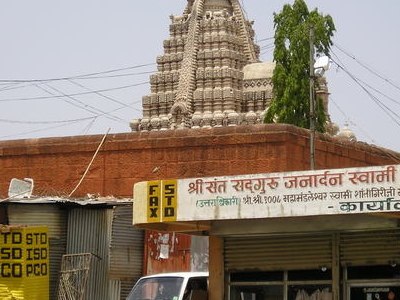 Jyotirlinga:
As per Shiv Mahapuran, once Brahma (the Hindu God of creation) and Vishnu (the Hindu God of saving) had an argument in terms of supremacy of creation. To test them, Shiva pierced the three worlds as a huge endless pillar of light, the jyotirlinga. Vishnu and Brahma split their ways to downwards and upwards respectively to find the end of the light in either directions. Brahma lied that he found out the end, while Vishnu conceded his defeat. Shiva appeared as a second pillar of light and cursed Brahma that he would have no place in ceremonies while Vishnu would be worshipped till the end of eternity. The jyotirlinga is the supreme partless reality, out of which Shiva partly appears.

The jyothirlinga shrines, thus are places where Shiva appeared as a fiery column of light. Originally there were believed to be 64 jyothirlingas while 12 of them are considered to be very auspicious and holy. Each of the twelve jyothirlinga sites take the name of the presiding deity - each considered different manifestation of Shiva. At all these sites, the primary image is lingam representing the beginningless and endless Stambha pillar, symbolizing the infinite nature of Shiva. The twelve jyothirlinga are Somnath in Gujarat, Mallikarjuna at Srisailam in Andra Pradesh, Mahakaleswar at Ujjain in Madhya Pradesh, Omkareshwar in Madhya Pradesh, Kedarnath in Himalayas, Bhimashankar in Maharastra, Viswanath at Varanasi in Uttar Pradesh, Triambakeshwar in Maharastra, Vaidyanath at Deogarh in Jharkand, Nageswar at Dwarka in Gujarat, Rameshwar at Rameswaram in Tamil Nadu and Grishneshwar at Aurangabad in Maharastra.

The Temple:
The Grishneswar temple was re-constructed by Maloji Bhosale of Verul, (grandfather of Chhatrapati Shivaji Maharaj) in the 16th century and later by Ahilyabai Holkar in 18th century, who also re-constructed the Kashi Vishwanath temple at Benares, and the Vishnupad Mandir at Gaya.

Pilgrimage:
Grishneshwar is an ancient pilgrimage site revered as the abode of one of the 12 Jyotirlingas of Shiva. It is located at a distance of 11 km from Daulatabad near Aurangabad in Maharashtra. Daulatabad was once known as Devagiri. Located nearby are the popular tourist attractions Ellora - featuring ancient rock cut monuments from the 1st millennium CE, and Ajanta known for its exquisite cave paintings again from the 1st millennium CE. The Grishneswar temple was constructed by Ahilyabhai Holkar who also re-constructed the Kashi Viswanatha temple at Benares and the Vishnu Paada temple at Gaya. Grishneshwar is also known as Ghushmeshwar.

Legend:
Legend has it that a devout woman Kusuma offered worship to Shiva regularly by immersing a Shivalingam in a tank, as a part of her daily ritual worship. Her husband's first wife, envious of her piety and standing in society murdered Kusuma's son in cold blood. An aggrieved Kusuma continued her ritual worship, and when she immersed the Shivalingam again in the tank, her son was miraculously restored to life. Shiva is said to have appeared in front of her and the villagers, and then one is believed to have been worshipped in the form of a Jyotirlinga Ghusmeshwar and also known as Kusumeshwar Jyotirlinga.

Here's the our members favorite photos of "Temples in Daulatabad". Upload your photo of Grishneshwar!

Going to Grishneshwar? Get answers from our friendly locals

Connect with Vishal Ramteke, Rahul Urunkar and 1 other members who have already visited Grishneshwar.