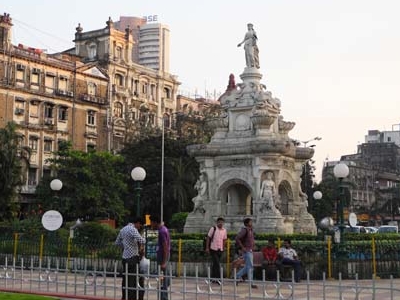 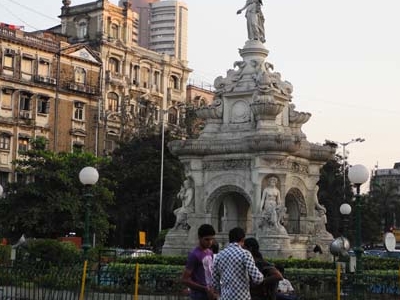 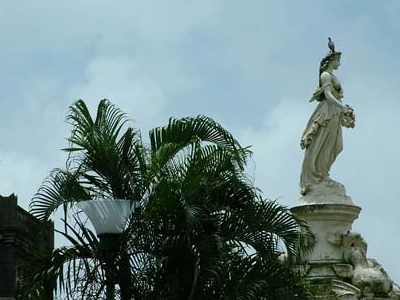 More Photos >
Save me
Been here
Want to go
Show on Map
Here to help 641 tour guides and 2,573 locals

Flora Fountain, at the Hutatma Chowk (Martyr's Square), is an ornamentally and exquisitely sculpted architectural heritage monument located at the southern end of the historic Dadabhai Naoroji Road, called the Mile Long Road, at the Fort business district in the heart of South Mumbai, Mumbai, India. Flora Fountain, built in 1864, is a fusion of water, architecture and sculpture, and depicts the Roman goddess Flora. It was built at a total cost of Rs. 47,000, or 9000 pounds sterling, a princely sum in those days.

The Chowk
From the time the Flora Fountain was built in 1864 and until 1960, the chowk (square) where five streets meet (hence, also known as the Picadilly Circus of Mumbai) and the fountain stands now, was named as the Flora Fountain area. But in 1960, to commemorate the martyrdom of the brave people who laid their lives in the turbulent birth of Maharashtra State at the square, it was christened as Hutatma Chowk with an impressive stone statue bearing a pair of torch holding patriots.

The Flora Fountain, surrounded by the British Victorian era heritage buildings, is very much part of the chowk and has been declared a heritage structure and it continues to charm visitors with its beauty and with its spray of water. It sits admirably well alongside with the Hutatma statue which adorns the chowk. (Picture depicts the two structures). It was the decision of the Maharashtra Legislative Assembly that recommended to the Government to take necessary steps to erect as early as possible a memorial at Flora Fountain in Bombay in commemoration of the sacrifices of the persons who died on the police firing at Flora Fountain in Bombay in the month of November 1955.

Visitor Information
The Fountain is in the heart of South Mumbai within walking distance from Shivaji Terminus and the Church Gate Railway Stations.The Maharashtra Tourism Development Corporation (MTDC) operates open–air tourist buses to give an aerial view of the iconic fountain and the city's unique distinctive historical, aesthetic and architectural identity depicted in the largest representations of the grand neo–Gothic style of architecture and also numerous ones of Indo-Saracenic architecture. Local cab system, auto rickshaws or local trains run frequently in Mumbai providing the other means of transport to the location.

The area surrounding the fountain gives excellent shopping opportunities in departmental and other stores for ethnic artifacts and glamorous products. Within a radius of 2 mi (3.2 km) of the fountain, visitors can also see the most impressive institutions and buildings namely, the Univertsity of Mumbai, the old Secretariat, and the famous Gateway Of India, the Bombay High Court (built in 1879 in the Venetian Gothic style characteristic of all of Bombay's public buildings put up in the 19th century), the Central Telegraph Office, the old Secretariat (built in 1874) and many other heritage buildings.

Heritage Walk
The Mumbai Heritage Walks (MHW) Group, founded in April 1999 as a marking of the World Heritage Day, by the city architects, arrange guided walks of different sites in Mumbai to provide an insight into Mumbai's architectural heritage, and announce a schedule every year for the walk. The charges for participation are nominal.

In the year 2004, the Group had arranged a walk along Flora Fountain – D.N.Road – V.T. – B.M.C. HQ and again in February 2009 they organized a 'Heritage Mile' running along ‘the one of its kind’ streetscape, which is an impressive example of formal urban design and planning in erstwhile colonial India. The walk was on February 10, 2009, as part of Kala Ghoda Arts Festival 2009, starting from the Flora Fountain to Crawford Market to Victoria Terminus and surrounding Fort precinct covering en–route the landmark monuments such the Vatcha Agiary, J. N. Petit Library, Bombay Mutual Building and several others.

Here's the our members favorite photos of "Fountains in Mumbai". Upload your photo of Flora Fountain!

Going to Flora Fountain? Get answers from our friendly locals

Get in touch with 6 Touristlink members who want to visit Flora Fountain or with Dhiraj Bandurkar, Mangesh Bulkar and 20 others who already have been here.