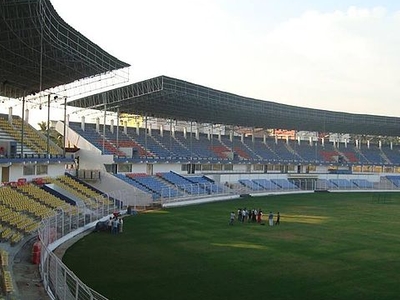 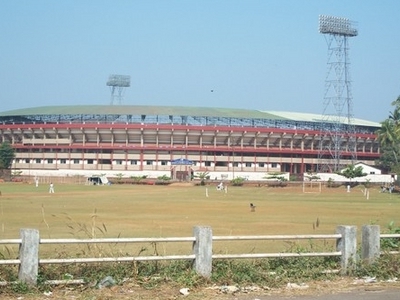 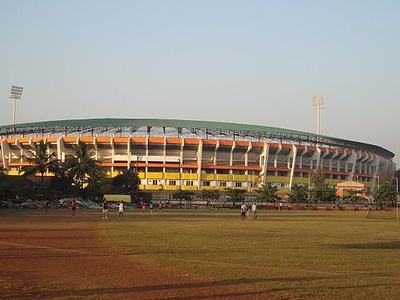 The Fatorda Stadium, formerly known as the Jawarharlal Nehru Stadium, is a multi-purpose stadium situated in Margao, Goa. The venue has been used to host both international football as well as cricket matches. It is Goa's only international stadium and has a seating capacity of 19,000 people. The venue was established in 1989 and is owned and operated by the Sports Authority of Goa.It is the current home of FC Goa, Dempo S.C., Salgaocar S.C., and Sporting Clube de Goa.

History
Beginning
Jawaharlal Nehru Stadium, Fatorda was built in a record 6 months time by the then Sports Minister Monte (D') Cruz. It was opened in 1989 as a football only stadium but in less than a year was redeveloped to include cricket. On 25 October 1989 the first cricket ODI was played between Australia and Sri Lanka.

Football clubs using the stadium
In 2006, before the 2007–08 I-League, all four Goan clubs (Dempo S.C., Churchill Brothers S.C., Salgaocar S.C., and Sporting Clube de Goa) announced that the Fatorda Stadium would be used as the home for all four teams' I-League matches. In 2014 Indian Super League club FC Goa announced it as their home ground.

Football
This venue has long been a mainstay of Indian football, having played host to many international games, including India's qualifiers for both the FIFA World Cup and AFC Asian Cup. The stadium is also used as a home venue for the major Goan clubs FC Goa, Dempo S.C., Churchill Brothers S.C., Salgaocar S.C. and Sporting Clube de Goa.

Cricket
Even though the stadium was originally built to be a football venue, over the past few years it has been increasingly used to host international cricket matches. Since hosting its first ever international in 1989 between Australia and Sri Lanka, it has played host to seven further One Day Internationals, the most recent being between India and Sri Lanka in 2007. The allocation of cricket matches to the stadium has often upset the Goan football community as it renders them unable to use the venue for hosting football.

Here's the our members favorite photos of "Stadiums in Goa". Upload your photo of Fatorda Stadium!

Going to Fatorda Stadium? Get answers from our friendly locals