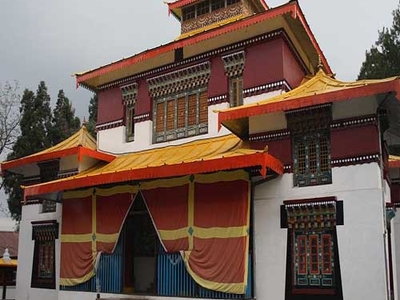 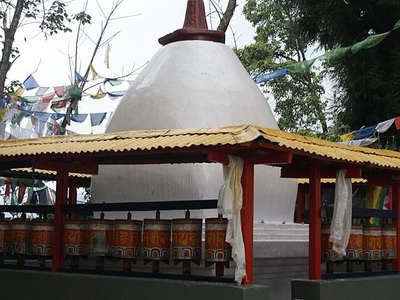 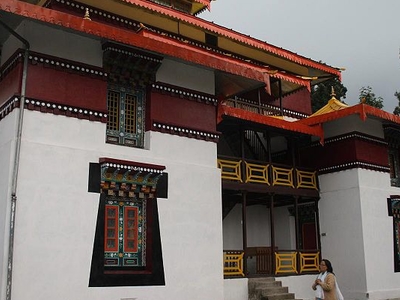 The Enchey Monastery was established in 1909 above Gangtok, the capital city of Sikkim in the Northeastern Indian state. It belongs to the Nyingma order of Vajrayana Buddhism. The monastery built around the then small hamlet of Gangtok became a religious centre.The location was blessed by Lama Drupthob Karpo, a renowned exponent of tantric (adept) art in Buddhism with flying powers; initially a small Gompa was established by him after he flew from Maenam Hill in South Sikkim to this site.

The literal meaning of Enchey Monastery is the “Solitary Monastery”. Its sacredness is attributed to the belief that Khangchendzonga and Yabdean – the protecting deities – reside in this monastery. As, according to a legend, Guru Padmasambhava had subdued the spirits of the Khangchendzonga, Yabdean and Mahākāla here. In view of this legend, the religious significance of Enchey Monastery is deeply ingrained in every household in Gangtok. It is also believed that these powerful deities always fulfil the wishes of the devotees.

Geography:
The monastery is built on a stunning ridge of a hill above the Gangtok city to its northeast from where the Kanchendzonga range is visible. It is located on Gangtok – Nathula road, above the Siniolochu lodge and passes through an avenue of sylvan coniferous trees, bypassing the TV telecommunications tower. It is about 3 kilometres (1.9 mi) from the northeast of the main market place in Gangtok.Even though it is a small monastery situated on a strategic peak overlooking Gangtok, compared to other manstedries in Sikkim, it provides spectacular views of the Kanchendzonga peak.

Architecture :
The monastery was first built in the 1840s by the eighth Chogyal and as a result, Gangtok then a small hamlet became a pilgrimage place. However, the monastery as seen now was aesthetically built in 1909.The monastery is topped by a shining golden cupola. It houses a number of images of Gods, Goddesses and religious objects.

Festival:
Detor Cham is the colourful and vibrant Cham dance festival that is held in the monastery during on the 18th and 19th day of the 12th Lunar month of the Tibetan calendar, corresponding to the dates during January/February of the Gregorian calendar. Other festivals observed in the Enchey Monastery are: the Singhe Chaam performed once every three years, Pang Lhabsol commemorating the swearing of blood-brotherhood between the Bhutias and Lepchas in the presence of Khangchendzonga as witness.

The Cham dances are mask dances where the dancers wearing ornate robes perform dances representing the Tibetan deity figurines of Mahakala (the protector) and mythical snow lions; both depict a third eye on their foreheads to represent the "need for inner reflection." The dance festivals are usually held prior to the Losar, the Tibetan New Year day (February/March) and Losoong, the Sikkimese New Year (December/January).

Here's the our members favorite photos of "Monasteries in Gangtok". Upload your photo of Enchey Monastery!

Going to Enchey Monastery? Get answers from our friendly locals

Get in touch with 1 Touristlink members who want to visit Enchey Monastery or with Simanachariya Travels and Raghu Nanden Sharma who already have been here.