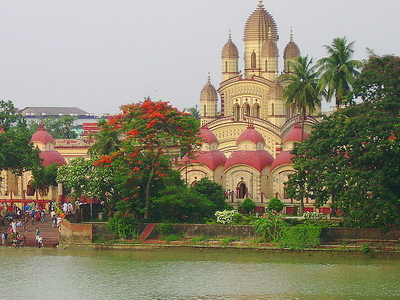 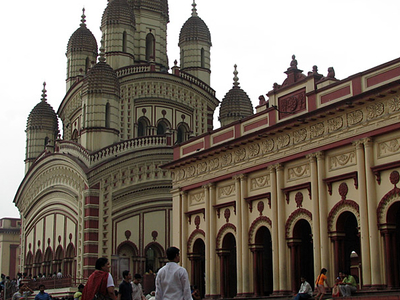 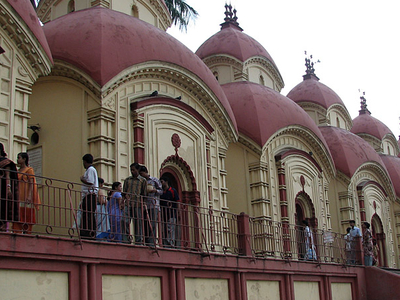 More Photos >
Save me
Been here
Want to go
Show on Map
Here to help 319 tour guides, 1,333 locals and 2 ambassadors

Dakshineswar Kali Temple is a Hindu temple located in Dakshineswar near Kolkata. Situated on the eastern bank of the Hooghly River, the presiding deity of the temple is Bhavatarini, an aspect of Kali, meaning, 'She who liberates Her devotees from the ocean of existence i.e. Saṃsāra'. The temple was built by Rani Rashmoni, a philanthropist and a devotee of Kali in 1855. The temple is famous for its association with Ramakrishna, a mystic of 19th Century Bengal.

The temple compound, apart from the nine-spired main temple, contains a large courtyard surrounding the temple, with rooms along the boundary walls. There are twelve shrines dedicated to Shiva—Kali's companion—along the riverfront, a temple to Radha-Krishna, a bathing ghat on the river, a shrine dedicated to Rani Rashmoni. 'Nahavat-Khana', the chamber in the northwestern corner just beyond the last of the Shiva temples, is where Ramakrishna spent a considerable part of his life.

History
The Dakshineswar Kali Temple was founded around the middle of the 19th Century by Rani Rashmoni. Rani Rashmoni belonged to Kaivarta caste and was well known for her philanthropic activities. In the year 1847, Rashmoni, prepared to go upon a long pilgrimage to the sacred Hindu city of Kashi to express her devotions to the Divine Mother. Rani was to travel in twenty four boats, carrying relatives, servants and supplies.

Architecture
Built in the traditional 'Nava-ratna' or nine spires style of Bengal architecture, the three-storeyed south-facing temple has nine spires distributed in upper two storeys, and stands on a high platform with a flight of stairs, overall it measures 46 feet (14 m) square and rises over 100 feet (30 m) high. The garbha griha (sanctum sanctorum) houses an idol of goddess Kali, known as Bhavataraini, standing on the chest of a lying Shiva, and the two idols are placed on a thousand-petaled lotus made of silver.

Close to the main temple are the row of twelve identical Shiva temples built facing the east in the typical ‘Aat Chala’ Bengal architecture, they are built on either side of the ghat on the Hoogly river. To the North east of the Temple Complex is the Vishnu Temple or the Radha Kanta’s Temple. A flight of steps lead to the columned verandah and into the temple where a silver throne rests with a 21 1⁄2-inch (550 mm) idol of Lord Krishna and a 16-inch (410 mm) idol of Radha.

Here's the our members favorite photos of "Temples in Kolkata". Upload your photo of Dakshineswar Kali Temple!

Going to Dakshineswar Kali Temple? Get answers from our friendly locals

Get in touch with 2 Touristlink members who want to visit Dakshineswar Kali Temple or with Gautam Podder, Susanta Das and 4 others who already have been here.