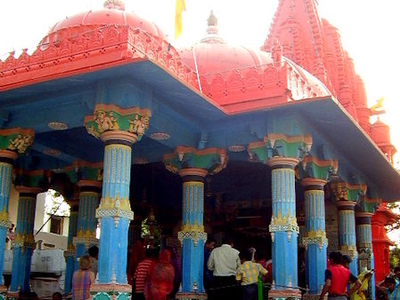 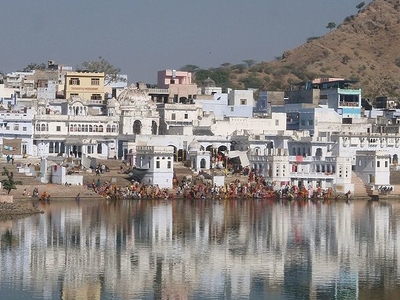 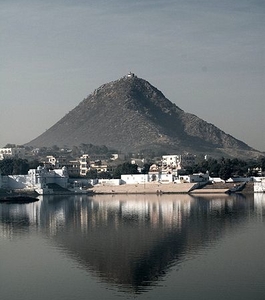 Jagatpita Brahma Mandir is a Hindu temple situated at Pushkar in the Indian state of Rajasthan, close to the sacred Pushkar Lake to which its legend has an indelible link. The temple is one of very few existing temples dedicated to the Hindu creator-god Brahma in India and remains the most prominent among them.

Although the present temple structure dates to the 14th century, the temple is believed to be 2000 years old. The temple is mainly built of marble and stone stabs. It has a distinct red pinnacle (shikhara) and a hamsa bird motif. The temple sanctum sanctorum holds the central images of Brahma and his second consort Gayatri. The temple is governed by the Sanyasi (ascetic) sect priesthood. On Kartik Poornima, a festival dedicated to Brahma is held when large number of pilgrims visit the temple, after bathing in the sacred lake.

History:
Pushkar is said to have over 500 temples (80 are large and the rest are small); of these many are old that were destroyed or desecrated by Muslim depredations during Mughal emperor Aurangzeb's rule (1658–1707) but were re-built subsequently; of these the most important is the Brahma temple. Though the current structure dates to the 14th century, the original temple is believed to be 2000 years old. The temple is described to have been built by sage Vishwamitra after Brahma's yagna.  It is also believed that Brahma himself chose the location for his temple. The 8th century Hindu philosopher Adi Shankara renovated this temple, while the current medieval structure dates to Maharaja Jawat Raj of Ratlam, who made additions and repairs, though the original temple design is retained.

Worship:
The temple is visited by pilgrims and also by the holy men and sages, after taking a ceremonial sacred bath in the Pushkar lake. It is also a practice that visit to the Brahma temple is followed by worship of his consort Gayatri, followed by visits to other temples as convenient. The temple is open for worship between 6:30 am and 8:30 pm during winter and 6:00 am to 9:00 pm during summer, with an interval in afternoon between 1:30 pm to 3:00 pm when the temple is closed. Three aratis are held in the temple: Sandhya arati in the evening about 40 minutes after sunset, Ratri Shayan arati (night-sleep arati) about 5 hours past sunset and Mangala arati in the morning, about 2 hours before sunrise.

Other Related Temples:
Temples Of Consorts:
Brahma's two consorts Savitri and Gayatri mentioned in the legend also have separate temples erected for them in Pushkar, but on hills at opposite ends of the lake. The first consort Savitri, who cursed Brahma, is described to be still seating annoyed and enraged in her shrine on the highest hill in Pushkar, while Gayatri afraid of Savatri's wrath sits at a lower hill at the other end, the eastern side of the lake.

Savitri Temple located on the top of Ratnagiri hill, behind the Brahma temple, overlooks the Pushkar Lake and the sand dunes on its western side. It is reached by one hour's trek over a series of steps on the hill. The temple (also made of marble) houses a statue of goddess Savitri. An early morning visit to the temple provides a good view of the lake. The Gayatri temple or Pap Mochani temple is accessible by a 30-minute climb from a track behind Marwar bus stand.

Atpateshwar or Apteshwar Temple:
The Atpateshwar temple, which is situated in a cave next to the Brahma temple, is dedicated to Shiva. This temple was built by Brahma after he found that Shiva attended the Yagna performed by him in the garb of a Tantric mendicant holding a skull. When Shiva was accosted for this appearance, he was piqued and filled the entire area of the yagna site with skulls. The agitated Brahma meditated to know the reason for such a situation, then he realised that the mendicant was none other than Shiva. Realising his folly, Brahma requested Shiva to attend the yagna. Shiva then attended the yagna holding the skull and Brahma in appreciation erected a temple in honour of Shiva as 'Atpateshwar', next to his own temple. The Linga of Shiva is large and is encircled by a snake made of copper. Shivaratri festival is a special occasion to visit this temple.

Here's the our members favorite photos of "Temples near Pushkar". Upload your photo of Brahma Temple!

Going to Brahma Temple? Get answers from our friendly locals

Get in touch with 1 Touristlink members who want to visit Brahma Temple or with Arpit Gupta and Peervoyages who already have been here.