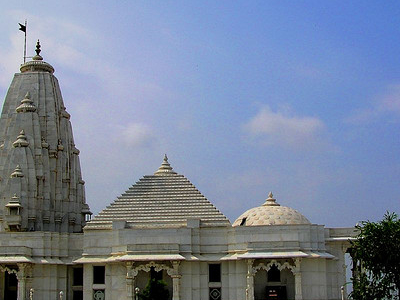 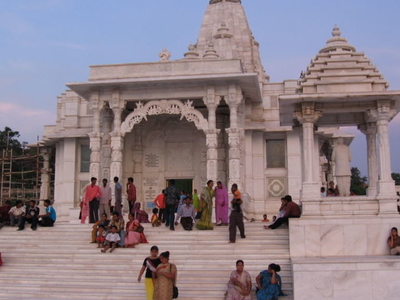 Birla Mandir, Jaipur is a Hindu temple located in Jaipur, India and is part of one of the several Birla mandirs located all around the country. The grand temple is located on an elevated ground at the base of Moti Dungari hill in Rajasthan. The temple is sometimes also referred to as the Laxmi Narayan Temple.

Gallery:
Birla Temple, Jaipur At the foot of Moti Dungri fort is the Birla Temple. This temple forms one of the major attractions of Jaipur. Birla Temple of Jaipur looks stunning, when it is brightly lit in the night. The enormous temple was built during the year 1988, by Birla Group of Industries, one of the business tycoons of India. The Temple is dedicated to Lord Vishnu (Narayan), the preserver and his consort Lakshmi, the Goddess of wealth. Due to this reason, Birla Temple is also known as Laxmi Narayan Temple. Birla Mandir is constructed in the finest quality of white marble. The three huge domes of the temple represent three different approaches to the religion. The beautiful white marble temple mesmerizes the onlookers, when it glows at night. Stained glass widows depict the scenes from Hindu scriptures. Ganesh the protector of households, is above the lintel, and the fine quality of marble is evident when you enter the temple and look back at the entrance way.

The images of Lakshmi and Narayan attract the attention, being made out from one piece of marble. Many of the deities of the Hindu pantheon are depicted inside the temple, and on the outside walls great historical personages and figures from all religions are shown, including Socrates, Zarathustra, Christ, Budhda, and Confucius. The Laxmi Narayan Mandir is a modern architectural marvel, surrounded by lush green gardens. The fascinating exteriors of the temple are carved splendidly with beautiful sculptures based of mythological themes, while the interiors have a large marble panel portraying mythological events.

Here's the our members favorite photos of "Temples in Jaipur". Upload your photo of Birla Mandir!

Going to Birla Mandir? Get answers from our friendly locals

Get in touch with 2 Touristlink members who want to visit Birla Mandir or with Sandeep Rayat, Aakash Garg and 18 others who already have been here.