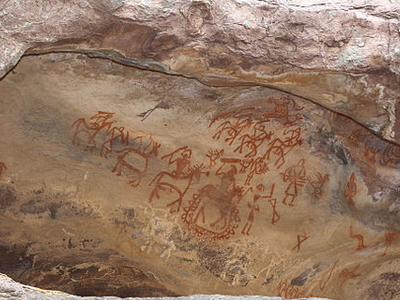 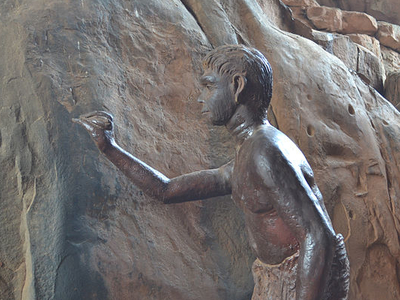 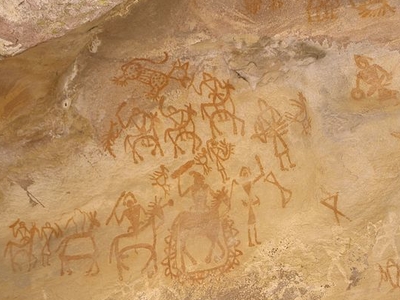 The Bhimbetka rock shelters are an archaeological World Heritage site located in Raisen District in the Indian state of Madhya Pradesh. The Bhimbetka shelters exhibit the earliest traces of human life in India and deliver traces of dance from prehistoric times; a number of analyses suggest that at least some of these shelters were inhabited by hominids like homo erectus more than 100,000 years ago.

Some of the Stone Age rock paintings found among the Bhimbetka rock shelters are approximately 30,000 years old (Paleolithic Age).The name Bhimbetka is associated with Bhima, a hero-deity renowned for his immense strength, from the epic Mahabharata.The word Bhimbetka is said to derive from Bhimbaithka, meaning "sitting place of Bhima".

Location:
The Rock Shelters of Bhimbetaka (or Bhim Baithaka) lie in the Raisen District of Madhya Pradesh, 45 km south of Bhopal at the southern edge of the Vindhyachal hills. South of these rock shelters are successive ranges of the Satpura hills.
The entire area is covered by thick vegetation, has abundant natural resources in its perennial water supplies, natural shelters, rich forest flora and fauna, and bears a significant resemblance to similar rock art sites such as Kakadu National Park in Australia, the cave paintings of the Bushmen in Kalahari Desert, and the Upper Paleolithic Lascaux cave paintings in France.

Discovery:
As reported in the UNESCO citation declaring the Rock Shelters of Bhimbetka as a World Heritage Site, Bhimbetka was first mentioned in Indian archeological records in 1888 as a Buddhist site, based on information gathered from local adivasis. Later, as V. S. Wakankar was traveling by train to Bhopal he saw some rock formations similar to those he had seen in Spain and France. He visited the area along with a team of archaeologists and discovered several prehistoric rock shelters in 1957.

Since then more than 700 such shelters have been identified, of which 243 are in the Bhimbetka group and 178 in the Lakha Juar group. Archeological studies revealed a continuous sequence of Stone Age cultures (from the late Acheulian to the late Mesolithic), as well as the world’s oldest stone walls and floors. There have been found also the oldest known petroglyphs of the world in 1990 - 1991 - 10 cupules and meandering line which could be up to 150,000 years old.The earliest paintings on the cave walls are believed to be of the Mesolithic period. A broad chronology of the finds has been done, but a detailed chronology is yet to be created.

The caves have evolved over time into excellent rock-shelters, ideal sites for aboriginal settlements. The smooth shape of the rocks has led some scientists to believe that the area was once under water. The rocks have taken on incredible shapes in several stunning hues and textures. Apart from the central place the aboriginal drawings have in human history, the caves themselves offer interesting material for a study of the Earth's history.Barkheda has been identified as the source of the raw materials used in some of the monoliths discovered at Bhimbetka.

Rock Art and Paintings:
The rock shelters and caves of Bhimbetka have a number of interesting paintings which depict the lives and times of the people who lived in the caves, including scenes of childbirth, communal dancing and drinking, and religious rites and burials, as well as the natural environment around them.

Executed mainly in red and white with the occasional use of green and yellow with themes taken from the everyday events of aeons ago, the scenes usually depict hunting, dancing, music, horse and elephant riders, animal fighting, honey collection, decoration of bodies, disguises and masking and household scenes. Animals such as bisons, tigers, lions, wild boar, elephants, antelopes, dogs, lizards, crocodiles, etc., have been abundantly depicted in some caves. Popular religious and ritual symbols also occur frequently.

Here's the our members favorite photos of "Caves in Bhopal". Upload your photo of Bhimbetka Rock Shelters!

Going to Bhimbetka Rock Shelters? Get answers from our friendly locals

Get in touch with 5 Touristlink members who want to visit Bhimbetka Rock Shelters or with Prasanna S, Brian Sullivan and 1 others who already have been here.