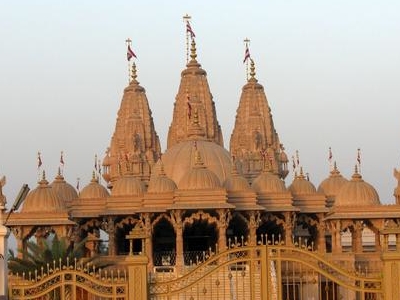 Bharuch also known as Broach, in Gujarat is situated at the mouth of the river Narmada. Bharuch is the administrative headquarters of Bharuch District.The city of Bharuch and its surrounds has been settled since far back into antiquity and was a ship building center and sea port in the pre-compass coastal trading routes to points West, perhaps as far back as the days of the Pharaohs, which utilised the regular and predictable monsoon winds or galleys.

Many goods from the Far East (the famed Spice and Silk trade) were trans-shipped there for the annual monsoon winds making it a terminus for several key land-sea trade routes. Bharuch was known to the Greeks, the various Persian Empires, in the Roman Republic and Empire, and in other Western centres of civilisation through the end of the European Middle Ages.In the 3rd century, Bharuch port was mentioned as Barugaza.Arab traders used to enter Gujarat via Bharuch to do business.The British and Valandas accepted the importance of Bharuch and established their business center there.During the British Raj it was officially known as Broach.

Bharuch is the home to the Gujarati Bhargav Brahmin community for ages.The community traces its lineage to Maharshi Bhrigurishi and Bhagwan Parshuram who is considered to be incarnation of Lord Vishnu. The Bhargav community still administers large amount of public Trusts in the city. However the present day Bhargav Brahmins have migrated to Mumbai, Surat, Vadodara, Ahmedbad and other countries. The community today guards & administers a number of old temples whose idols have been saved over the centuries from fanatical religious aggression.

The city has textile mills, chemical plants, long staple cotton, dairy products and much more. Gujarat's biggest liquid cargo terminal is situated there. It also houses many multinational companies, such as Videocon, BASF, Reliance, and Welspun Maxsteel Ltd[citation needed]. Bharuch is a shopping center well known for its salty peanuts. Because of the distinctive colour of the soil here that is ideal for cotton cultivation, Bharuch is sometimes referred to as 'Kanam Pradesh' (black soil land).

Shopping and Recreation:
There are various avenues for leisure time activities in Bharuch, and there are a few very good parks maintained by the municipal commission. Privately owned parks are also there. Among them, J. B. Modi Park and Vasu Van Nisarg Udyan are very famous.There are river banks where people go for strolls, as well as a couple of libraries and a few auditoriums. The auditoriums along with movie halls make theatrical entertainment available in the city. There is a crowded but fascinating bazaar in old Bharuch. One can find a number of things in this market.

Bharuch is well known for textile products. Salted Peanuts and Sweets of Bharuch are renowned and admired World-wide.Of late there has been a boom in the retail sector in the city and there are new shopping malls and multiplexes opening up all over the place. Shopping malls like Big Bazar, Reliance Hyper Market, V-Mart, [Mayuri],[Acropolis mall] are also there in Bharuch. Multiplexs like INOX, Fame are also there in Bharuch.

Here's the our members favorite photos of "Cities in Gujarat". Upload your photo of Bharuch!

Going to Bharuch? Get answers from our friendly locals