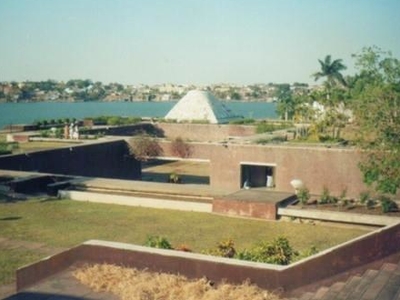 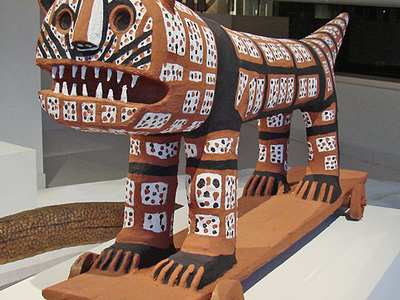 Bharat Bhavan is an autonomous multi-arts complex and museum in the state of capital Bhopal, established and funded by the Government of Madhya Pradesh. Opened in 1982, facing the Upper Lake, Bhopal, it houses an art gallery, a fine art workshops, an open-air amphitheatre, a studio theatre, an auditorium, a museum tribal and folk art, libraries of Indian poetry, classical music as well as folk music.

History
The early 1980s, saw not just burgeoning Indian arts scene, but also a renewed governmental focus on developing arts across the nation, through regional centres for arts, in various state capital cities. The initiative in Madhya Pradesh was taken by cultural administrator, Ashok Vajpeyi, an IAS-officer in state Ministry of Education (1966-1992), who was also behind the setting up of literary organization, Kalidas Akademi in Ujjain, which opened later in 1983. Though several cultural initiatives lost steam in later years in many parts of India, one such project became a success, Bharat Bhavan (India House) in Bhopal.

The project started taking shaped under noted artist J. Swaminathan, as the construction started in 1980. The complex was aimed to create a space for interaction between people involved in the literary field, visual arts and theatre artistes, thus complex by noted architect, Charles Correa was devised like a campus, and incorporated structures on cascading levels around terraced gardens leading down to the Upper Lake, Bhopal (now renamed Bhojtal). The building was highlighted by concrete domes and exposed brickwork, and was designed to merge into the surrounding landscape of slopping rocks. The building is today seen as an important example of modern Indian architecture.

The institution was finally inaugurated on February 13, 1982, by then Prime Minister, Indira Gandhi. It was established and funded by the Department of Culture, Government of Madhya Pradesh, though it is run by an autonomous a 12-member Bharat Bhavan Trust. In the following decade, the institution grew to become an important cultural institution of India as it started attracting artists, scholars and students from Indore, Jabalpur, Mumbai, Kolkata and even foreign visitors.

Overview
The complex includes an art gallery of Indian painting and sculpture, a fine art workshop, an open-air amphitheatre (Bahirang), a studio theatre (Abhirang), an auditorium (Antarang), a museum tribal and folk art, libraries of Indian poetry, classical music as well as folk music. Besides this, Bhavan also hosts various artists and writers under its artist-in-residence program at the "Ashram". Over the years, it has also become a popular tourist attraction

Here's the our members favorite photos of "Concert Hall in Bhopal". Upload your photo of Bharat Bhavan!

Going to Bharat Bhavan? Get answers from our friendly locals

Brian Sullivan is the only Touristlink member to visit Bharat Bhavan. Have you been here? Click here to save it.

Love concert hall? Check these out;