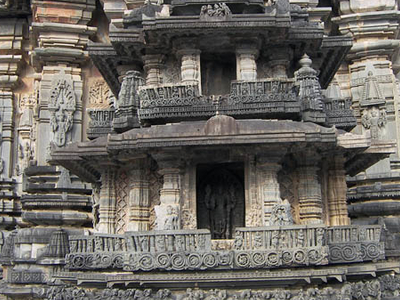 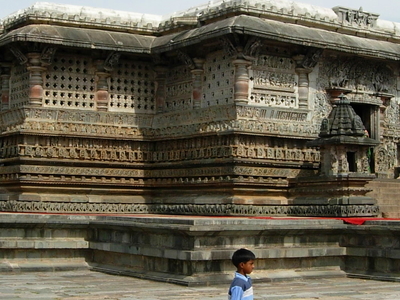 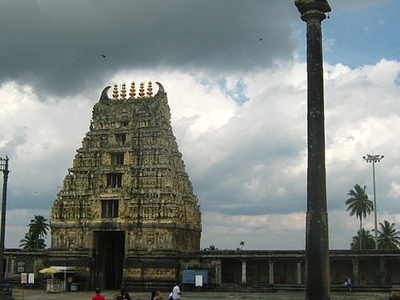 More Photos >
Save me
Been here
Want to go
Show on Map
Here to help 2 tour guides, 12 locals and 3 ambassadors

Belur (ಬೇಲೂರು) is a Town Municipal Council in Hassan district in the state of Karnataka, India. The town is renowned for its Chennakeshava temple, one of the finest examples of Hoysala workmanship.

History:
Belur was the early capital of the Hoysala Empire. With Halebidu which is only 16 km away, this is one of the major tourist destinations in Karnataka, India. Belur is located in Hassan district. According to inscriptions discovered here, it was also referred to as Velapuri. The main attraction in Belur is the Chennakeshava temple complex which contains the Chennakesava Temple (dedicated to Chennakeshava, meaning handsome Vishnu) as the centre piece, surrounded by the Kappe Chennigraya temple built by Shantaladevi, queen of king Vishnuvardhana. There are two more shrines here that are still in use by devotees and there is a Pushkarni or stepped well to the right side of the main entrance.

The Dravida style rayagopuram at the entrance which was a later addition by the Vijayanagar kings, who considered this deity as one of their Kuladevata or family god. The temple is one of the finest examples of Hoysala architecture. It was built by king Vishnuvardhana in commemoration of his victory over the Cholas at Talakad in 1117 CE. Legend has it that it took 103 years to complete and Vishnuvardhana's grandson Veera Ballala II completed the task. The facade of the temple is filled with intricate sculptures and friezes with no portion left blank. The intricate workmanship includes elephants, lions, horses, episodes from the Indian mythological epics, and sensuous dancers (Shilabalikas).

Inside the temple are a number of ornate pillars. Darpana Sundari (Lady with the mirror) carved on walls of Belur Temple is one of major attractions in the complex. A legend says that Dankanachari (son of Jakanachari) found that the main statue of Lord Vishnu was faulty and had frog inside it. Jakana, shocked to believe this, cuts his right hand. He will begin to build the other temple and contemplates the task. Later, the old temple (which had faulty statue) came to be known as kappechennigaraaya's temple (kappe=frog), This temple along with Hoysaleswara Temple in Halebidu and the Jaina monuments at Shravanabelagola are being proposed as UNESCO World heritage sites.

Hoysalas:
Hoyasalas - “Hoy Sala” meaning “Strike Sala”. Guru Sudatta Muni said to his student, Sala who was in combat with a tiger. The duo were performing rituals at the Vasantha Parameshwari Temple in a village called Sasakapura or Sosevur. The tiger attacked them, Sala struck the animal with one blow, and both were immortal. Sala became the first ruler and founder of the Hoysala dynasty. This incident was so patronized and it became the emblem of the Hoysala. The Cholas were defeated by the Holsalas. Sosevur became the capital of the Hoysala is presently Angadi, a small hamlet of Chikmagalur. The temple of Vasantha Parameshwari lies in ruins. Journery of the Hoysalas begins1000 years ago, they were not born rulers and still they went onto rule for 300 years. They were tribal chiefs who subordinates of the Westeren Chalukyas. Studies show that they were descendants of Yadava clan, some indicates that they were from Male (hills) natives of Malnad.

Arekalla, (in 950), Maruga and Nripa Kama I (in 976) are some of the kings from Hoysala. Ones who really shaped the history are King Vishnuvardhan and Veera Bhallalla. King Vishnuvardhan, is famous for his patronage to arts along with their exploits on the battlefield. The famous Belur and Halebid Temples were built by him. During his reign a baffling 1500 temples were built in 958 locations out of which only 100 survive today. Vishnuvardhan was also known as “Bittideva”. He was a Jain who became a Hindu following the preachings of Ramanuja. His queen Shantaladevi continued to patronize Jainism. The Chennakesava temple is important among the temples of Belur.

One can find the inscriptions in the ruins of Angadi. The temple is being restored amidst verdant green plantations. The Archeological Survey of Indian has taken up the restoration of the broken pillars, strewn inscriptions and defigured idols. However there are several temples tucked away in small hamlets, some of them are Kedareshwara, Dodgaddavalli, Marle, Mosale, Nugehalli, Hosaholalu, Somnathpur, Talakadu, Arasikere, Tarikere, Belavadi, Javagal. Along with the temples are the Basadis. In Tumkur district, Kaidala is the birthplace of the sculptor Jakanacharya who built the temple in Bellur.

Here's the our members favorite photos of "Cities in Hassan". Upload your photo of Belur!

Going to Belur? Get answers from our friendly locals