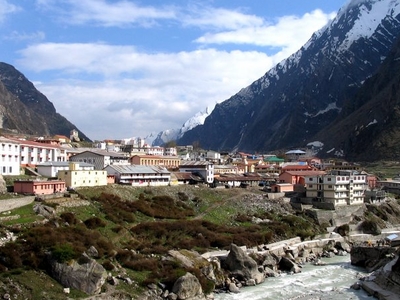 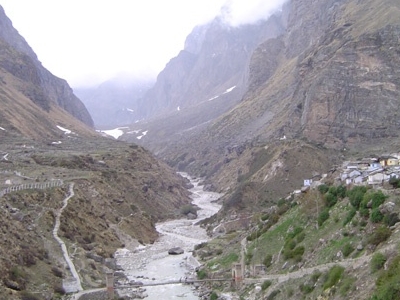 More Photos >
Save me
Been here
Want to go
Show on Map
Here to help 297 tour guides, 382 locals and 1 ambassador

Badrinath is a Hindu holy town and a nagar panchayat in Chamoli district in the state of Uttarakhand, India. It is the most important of the four sites in India's Char Dham pilgrimage. The town gets its name from the Holy temple of Badrinath.

Geography:
It is in the Garhwal hills, on the banks of the Alaknanda River. The town lies between the Nar and Narayana mountain ranges and in the shadow of Nilkantha peak (6,560m). Badrinath is located 301 km north of Rishikesh. From Gaurikund (near Kedarnath) to Badrinath by road is 233 km.

Significance:
Badrinath was re-established as a major pilgrimage site by Adi Shankara in the ninth century.  In recent years its popularity has increased significantly, with an estimated 600,000 pilgrims visiting during the 2006 season, compared to 90,676 in 1961. The temple in Badrinath is also a sacred pilgrimage site for Vaishnavites. Badrinath has been mentioned as a holy place in scriptures and legends for thousands of years. According to the Bhagavata Purana, "There in Badrikashram the supreme being (Vishnu), in his incarnation as the sages Nara and Narayana, had been undergoing great penance since time immemorial for the welfare of all living entities." Badri refers to a berry that was said to grow abundantly in the area, and nath means "Lord of". Badri is also the Sanskrit name for the Indian Jujube tree, which has an edible berry. Some scriptural references refer to Jujube trees being abundant in Badrinath.

History And Legend:
The Badrinath area is referred to as Badari or Badarikaashram in Hindu scriptures. It is a place sacred to Vishnu, particularly in Vishnu's dual form of Nara-Narayana. Thus, in the Mahabharata, Krishna, addressing Arjuna, says, "Thou wast Nara in a former body, and, with Narayana for thy companion, didst perform dreadful austerity at Badari for many myriads of years." One legend has it that when the goddess Ganga was requested to descend to earth to help suffering humanity, the earth was unable to withstand the force of her descent. Therefore the mighty Ganga (Ganges) was split into twelve holy channels, with Alaknanda one of them.

One more logical Legend explains both name itself and sitting posture as this place was full of Badri (Bael Fruit, 'Ber' in Hindi) bushes and Vishnu meditating for couple of hundred years,beloved Lakshmi stood next to him sheltering him from scorching sunlight turned into a Badri herself called 'BADRI VISHAL' and her lord (Nath) became the BadriNath. The mountains around Badrinath are mentioned in the Mahabharata, when the Pandavas are said to have ended their life by ascending the slopes of a peak in western Garhwal called Swargarohini - literally, the 'Ascent to Heaven'. Local legend has it that the Pandavas passed through Badrinath and the town of Mana, 4 km north of Badrinath, on their way to Svarga (heaven). There is also a cave in Mana where Vyasa, according to legend, wrote the Mahabharata.

Pilgrimage:
Located only a few kilometers from the Indo-China (Tibet) border, Badrinath is generally a two-day-long journey from either Kedarnath, the site that precedes it in the Char Dham circuit, or one of the main disembarkation points on the plains. Hemkund Sahib, an important Sikh pilgrimage site, is on the way to Badrinath, so the road is especially crowded during the summer pilgrimage season. The temple and its substantial surrounding village are accessible by road. The best time to visit Badrinath is between June and September. Warm clothes are recommended all year. The northern math established by Adi Sankara is nearby at Jyotirmath. Other places in the area are Haridwar and Rishikesh.

How To Reach Badrinath:

Here's the our members favorite photos of "Towns & Villages in Uttarakhand". Upload your photo of Badrinath!

Going to Badrinath? Get answers from our friendly locals