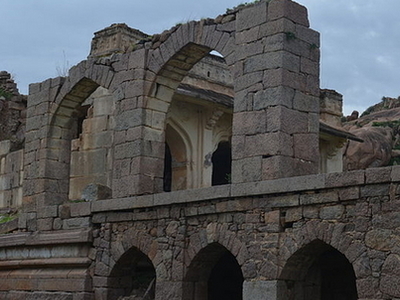 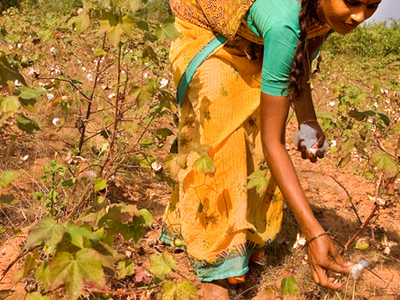 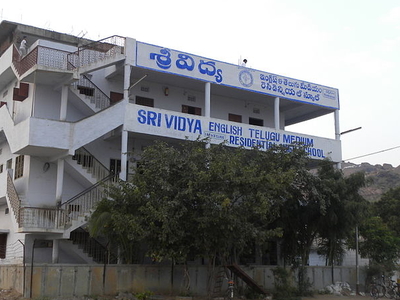 Adoni(also known as Adhoni) is a municipality(Nagar Palika), mandal headquarters and commercial town in Kurnool district in the Indian state of Andhra Pradesh. It is 180 miles (300 km) from Hyderabad and 307 miles (494 km) from Chennai by rail. The famous Mantralayam (Swami Raghavendra's mutt) is near to Adoni. It is approximately 42 km by rail. From the Railway Station, it is 16 km to Swami Raghavendra's mutt. Adoni has a population of about 2,43,247 persons (of whole Adoni Mandal).

Adoni is 245th biggest city in terms of population in India.[2] In terms of population it secured 23rd place in state according to the census of 2011.[3][4] Once a stronghold of the medieval Vijayanagara Empire, today it has a substantial textile industry. The hill-fort, now in ruins, was an important seat of government in Islamic times and is frequently mentioned in the wars of the 18th century. Adoni is located in the border of Andhra Pradesh and Karnataka. During British period Adoni was known as Second Mumbai as it is the hub for all types of businesses. As many rice mills are sealed due to some reasons, the production of rice is reduced. But still Adoni is the richest producer of cotton and it there is a big market yard in the town and hence the town is called as the Town of Cotton or Grain Market of South India

History
Adoni has undergone a number of substantial changes over the past few centuries. Emerging as a military base for the Vijayanagara Empire in the 15th century, the city has evolved to become a modern, manufacturing hub. Under the Vijayanagara, the city stood at the center of the consolidation of a shifting, fragmented countryside into a more structured empire. Even after the Empire fell in the 16th century, as a product of military conflicts, the city remained a core part of Southern Indian history.

Ruins
Of historical interest are the ruins of a royal fort dating back to the medieval empire of Vijayanagar, which flourished from the 14th to the 16th century. Several Persian and Arabic inscriptions which throw light on various aspects of historical interests are found here.

Historical Geography
Adoni is having many beautiful Ganesha temples and famous dargah's. Many Dargah as well as Temple are tourist place in Adoni . Everyone should visit once Adoni as it a wonderful Place. The most well known site in the city includes the Ranmandala Hill, which houses the Lord, and Dargah like Hazrath Shehzada Vali, Syed Shah Jamalullah Quadri Alhamav. Nearby Station, The Ramjala Lake plays a crucial role as it provide water for the goddess. The lake’s direct tributary is the Tungabhadra River, which provides drinking water for the town, and also serves as a tourist attraction with its munificent water birds. With a rich cultural history, the city’s physical geography reflects unique elements of (Hindu and Muslims)influence over the span of generations. Adoni is having a great History of "Sri Shanta Malleshwara Swamy Temple or Shanta Mallappa Swamy,Sri Amba Bhavani Temple,and Hazrath Syed Taher Shah Khadri(RA)" One of the most famous and historical well, which is popularly known as Venkanna Bavi, a biggest well located in the heart of the town.

Rail
The Railway station of Adoni was built during British rule, it exists till now, Indian Government haven't made any modification to this railway station. So it looks very aged. Adoni comes under South Central Railway. Adoni is on the Chennai-Mumbai Railway Line and several trains run daily to these cities and New Delhi. Adoni is on the Guntakal - Wadi Line and has daily trains to Hyderabad, Bengaluru, Mumbai, Chennai, Kanyakumari, Gulbarga, Ahmedabad, Tirupathi etc. Trains to Mantralayam, where the Brindavan of Swami Raghavendra is situated, passes through Adoni. New Train has been introduced between Chennai and Shirdi Sai via Adoni.

Trade
Cotton being picked by hand in a village of Adoni mandal. Adoni is a famous trading centre in Rayalaseema. There is a big JLB market which is named after Jhansi Lakshmi Bai and which is situated in the heart of the town near Shahi Jamia Masjid and Sri Mahayogi Lakshmamma Avva Temple. It is famous for gold, Textile and cotton trade.

Cotton Dhurries locally known as 'shatranjis', rich in quality and design, are produced on horizontal looms with heavy cotton threads. Their skillful weaving with beautiful color contrasts has created a sensation in the export market. Certain low cost are manufactured at Adoni in Kurnool district. They are also showcased during various events at Shilparamam, the arts and crafts village at Hyderabad.

Entertainment Points
In Adoni many entertainmernt places are present, movie theateres[28] in Adoni are

Apart from these parks are also present in the town. Some of them are Children's park, New park, Gandhi Park etc.

Here's the our members favorite photos of "Cities in Andhra Pradesh". Upload your photo of Adoni!

Going to Adoni? Get answers from our friendly locals