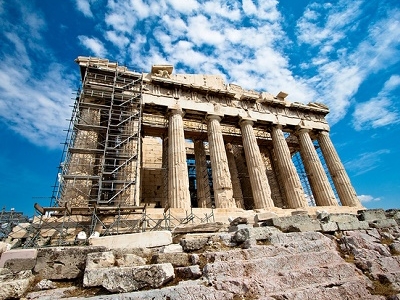 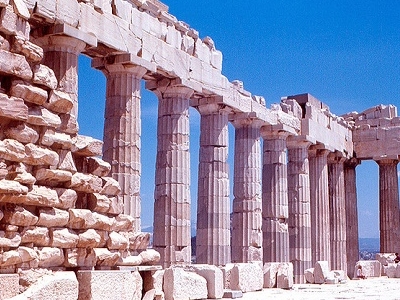 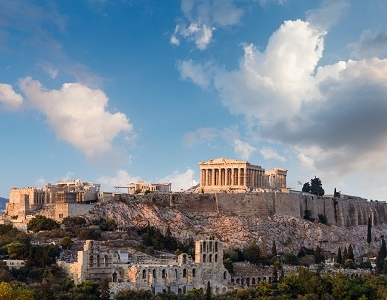 The Parthenon is a former temple on the Athenian Acropolis, Greece, dedicated to the goddess Athena, whom the people of Athens considered their patron. Construction began in 447 BC when the Athenian Empire was at the height of its power. It was completed in 438 BC although decoration of the building continued until 432 BC.

It is the most important surviving building of Classical Greece, generally considered the zenith of the Doric order. Its decorative sculptures are considered some of the high points of Greek art. The Parthenon is regarded as an enduring symbol of Ancient Greece, Athenian democracy and western civilization, and one of the World's greatest cultural monuments. The Greek Ministry of Culture is currently carrying out a program of selective restoration and reconstruction to ensure the stability of the partially ruined structure.

The Parthenon itself replaced an older temple of Athena, which historians call the Pre-Parthenon or Older Parthenon, that was destroyed in the Persian invasion of 480 BC. The temple is archaeoastronomically aligned to the Hyades. While a sacred building dedicated to the city's patron goddess, the Parthenon was actually used primarily as a treasury. For a time, it served as the treasury of the Delian League, which later became the Athenian Empire. In the 5th century AD, the Parthenon was converted into a Christian church dedicated to the Virgin Mary.

After the Ottoman conquest, it was turned into a mosque in the early 1460s. On 26 September 1687, an Ottoman ammunition dump inside the building was ignited by Venetian bombardment. The resulting explosion severely damaged the Parthenon and its sculptures. In 1806, Thomas Bruce, 7th Earl of Elgin removed some of the surviving sculptures with the alleged permission of the Ottoman Empire. These sculptures, now known as the Elgin Marbles or the Parthenon Marbles, were sold in 1816 to the British Museum in London, where they are now displayed. Since 1983 (on the initiative of Culture Minister Melina Mercouri), the Greek government has been committed to the return of the sculptures to Greece.

Sculpture:
The cella of the Parthenon housed the chryselephantine statue of Athena Parthenos sculpted by Phidias and dedicated in 439 or 438 BC. The decorative stonework was originally highly coloured. The temple was dedicated to Athena at that time, though construction continued until almost the beginning of the Peloponnesian War in 432. By the year 438, the sculptural decoration of the Doric metopes on the frieze above the exterior colonnade, and of the Ionic frieze around the upper portion of the walls of the cella, had been completed.

The richness of the Parthenon's frieze and metope decoration is in agreement with the function of the temple as a treasury. In the opisthodomus (the back room of the cella) were stored the monetary contributions of the Delian League, of which Athens was the leading member.

Here's the our members favorite photos of "Ruins in Athens". Upload your photo of Parthenon!

Going to Parthenon? Get answers from our friendly locals

Get in touch with 16 Touristlink members who want to visit Parthenon or with Aamir Jamal, Chaba Kayi and 32 others who already have been here.