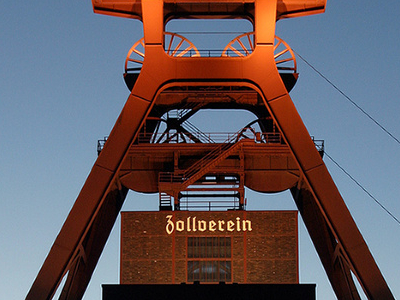 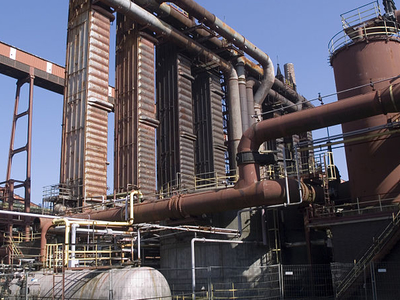 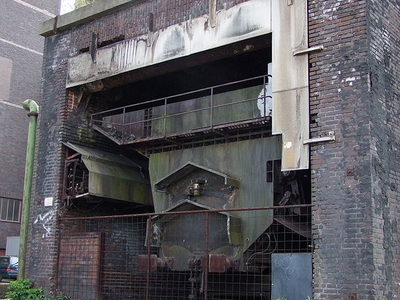 The Zollverein Coal Mine Industrial Complex (German Zeche Zollverein) is a large former industrial site in the city of Essen, North Rhine-Westphalia, Germany. It has been inscribed into the UNESCO list of World Heritage Sites since December 14, 2001 and is one of the anchor points of the European Route of Industrial Heritage.

The first coal mine on the premises was founded in 1847, mining activities took place from 1851 until December 23, 1986. For decades starting in the late 1950s, the two parts of the site, Zollverein Coal Mine and Zollverein Coking Plant (erected 1957−1961, closed on June 30, 1993), ranked among the largest of their kinds in Europe. Shaft 12, built in Bauhaus style, was opened in 1932 and is considered an architectural and technical masterpiece, earning it a reputation as the “most beautiful coal mine in the world”.

History
Zollverein Coal Mine was founded by Duisburg-born industrialist Franz Haniel (1779–1868), who needed coke for steel production. Test drillings in the Katernberg region (nowadays a suburb of Essen) had disclosed a very rich layer of coal, which was then named after the German Customs Union (Zollverein) founded in 1834. In 1847, Haniel founded the bergrechtliche Gewerkschaft Zollverein (a special kind of Prussian corporation for the exploitation of natural resources) and distributed the shares of the new company amongst the members of his family and the landowner of the to-be Zollverein territory.

Becoming a Monument
As with most sites of the heavy industries that had been closed down, Zollverein was predicted to face a period of decay. Surprisingly, the state of North Rhine-Westphalia (NRW) bought the coal mine territory from the RAG immediately after it had been closed down in late 1986, and declared shaft 12 a memorial. This went along with the obligation to preserve the site in its original state and to minimize the effects of weathering. In 1989, the city of Essen and NRW founded the Bauhütte Zollverein Schacht XII that should take care for the site and which was replaced by the Stiftung Zollverein (Zollverein Foundation) in 1998.

After it had been closed down in 1993, the coking plant was planned to be sold to China. The negotiations failed and it was subsequently threatened to be demolished. However, another project of the state of NRW set the coal mine on a list of future exhibition sites resulting in first gentle modifications and the cokery also became an official memorial in 2000. On its 25th session in December 2001, the United Nations Educational, Scientific and Cultural Organization (UNESCO) declared both the sites of the shafts 12 and 1/2 and the cokery a World Heritage Site.

Here's the our members favorite photos of "Mines in Essen". Upload your photo of Zollverein Coal Mine Industrial Complex!

Get in touch with 12 Touristlink members who want to visit Zollverein Coal Mine Industrial Complex or with Marco Dũng, Holiday Zone and 3 others who already have been here.

Love mines? Check these out;

Top Voted Mines Around the World