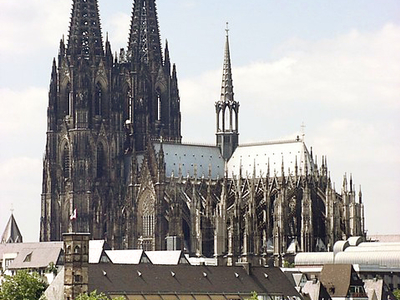 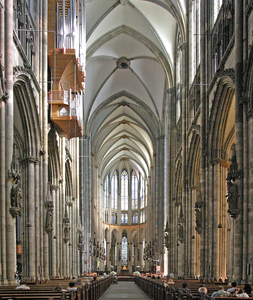 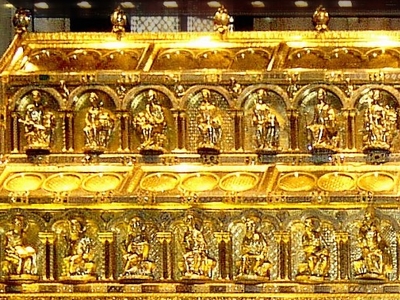 Cologne Cathedral is a Roman Catholic church in Cologne, Germany. It is the seat of the Archbishop of Cologne and the administration of the Archdiocese of Cologne. It is a renowned monument of German Catholicism and Gothic architecture and is a World Heritage Site. It is Germany's most visited landmark, attracting an average of 20,000 people a day.

Construction of Cologne Cathedral commenced in 1248 but was halted in 1473, leaving it unfinished. Work recommenced in the 19th century and was completed, to the original plan, in 1880. It is 144.5 metres (474 ft) long, 86.5 m (284 ft) wide and its towers are approximately 157 m (515 ft) tall. The cathedral is the largest Gothic church in Northern Europe and has the second-tallest spires and largest facade of any church in the world. The choir has the largest height to width ratio, 3.6:1, of any medieval church.

History
Ancient Site
When the present Cologne Cathedral was commenced in 1248, the site had been occupied by several previous structures, the earliest of which may have been a grain store, perhaps succeeded by a Roman temple built by Mercurius Augustus. From the 4th century the site was occupied by Christian buildings, including a square edifice known as the "oldest cathedral" and commissioned by Maternus, the first Christian bishop of Cologne.

A free-standing baptistery from the 6th century was located at the east end of the Cathedral. The baptistery was demolished to build the old cathedral in the 9th century. Now only the ruins of the baptistery and the octagonal baptismal font remain. The second church, the so-called "Old Cathedral", was completed in 818. This was destroyed by fire on 30 April 1248, during demolition in preparation for a new cathedral.

World Heritage Site
In 1996, the cathedral was added to the UNESCO World Heritage List of culturally important sites. In 2004 it was placed on the "World Heritage in Danger" list, as the only Western site in danger, due to plans to construct a high-rise building nearby, which would have visually impacted the site. The cathedral was removed from the List of In Danger Sites in 2006, following the authorities' decision to limit the heights of buildings constructed near and around the cathedral.

As a World Heritage Site, and with its convenient position on tourist routes, Cologne Cathedral is a major tourist attraction, the visitors including many who travel there as a Christian pilgrimage. Visitors can climb 509 stone steps of the spiral staircase to a viewing platform about 98 m (322 ft) above the ground. The platform gives a scenic top view of the Rhine.

On 18 August 2005, Pope Benedict XVI visited the cathedral during his apostolic visit to Germany, as part of World Youth Day 2005 festivities. An estimated one million pilgrims visited the cathedral during this time. Also as part of the events of World Youth Day, Cologne Cathedral hosted a televised gala performance of Beethoven's Missa Solemnis, performed by the Royal Philharmonic Orchestra and the London Philharmonic Choir conducted by Sir Gilbert Levine.

Architecture
The design of Cologne Cathedral was based quite closely on that of Amiens Cathedral in terms of ground plan, style and the width to height proportion of the central nave. The plan is in the shape of a Latin Cross, as is usual with Gothic cathedrals.

It has two aisles on either side, which help to support one of the very highest Gothic vaults in the world, being nearly as tall as that of the Beauvais Cathedral, much of which collapsed. Externally the outward thrust of the vault is taken up by flying buttresses in the French manner. The eastern end has a single ambulatory, the second aisle resolving into a chevet of seven radiating chapels.

Treasures
One of the treasures of the cathedral is the High Altar which was installed in 1322. It is constructed of black marble, with a solid slab 15 feet (4.6 m) long forming the top. The front and sides are overlaid with white marble niches into which are set figures, with the Coronation of the Virgin at the centre.

The most celebrated work of art in the cathedral is the Shrine of the Three Kings, commissioned by Philip von Heinsberg, archbishop of Cologne from 1167 to 1191 and created by Nicholas of Verdun, began in 1190. It is traditionally believed to hold the remains of the Three Wise Men, whose relics were acquired by Frederick Barbarossa at the conquest of Milan in 1164.

The shrine takes the form a large reliquary in the shape of a basilican church, made of bronze and silver, gilded and ornamented with architectonic details, figurative sculpture, enamels and gemstones. The shrine was opened in 1864 and was found to contain bones and garments.

Bells
The cathedral has eleven church bells, four of which are medieval. The first was the 3.8-ton Dreikönigsglocke ("Bell of the Three Kings"), cast in 1418, installed in 1437, and recast in 1880. Two of the other bells, the Pretiosa (10.5 tons; at that time the largest bell in the Western world) and the Speciosa (5.6 tons) were installed in 1448 and remain in place today.

Here's the our members favorite photos of "Churches in North Rhine-Westphalia". Upload your photo of Cologne Cathedral!

Going to Cologne Cathedral? Get answers from our friendly locals

Get in touch with 25 Touristlink members who want to visit Cologne Cathedral or with Gili Wisata, Carlos Oribe and 66 others who already have been here.