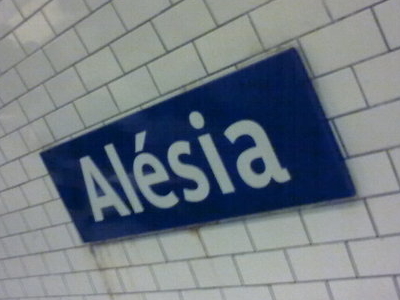 Alésia is a station of the Paris Métro on line 4 in the 14th arrondissement. The line 4 platforms were opened on 30 October 1909 when the southern section of the line opened between Raspail and Porte d'Orléans. The name refers to Rue d'Alésia, named for the Battle of Alesia between the Gauls of Vercingetorix and the Romans of Julius Caesar. This stop is featured in the animated films "The Twelve Tasks of Asterix" and "Lair of the Beast". The choice of this station is due to the origin of its name.

Here's the our members favorite photos of "Metro Stations in Paris". Upload your photo of Alesia Metro Station!

Going to Alesia Metro Station? Get answers from our friendly locals