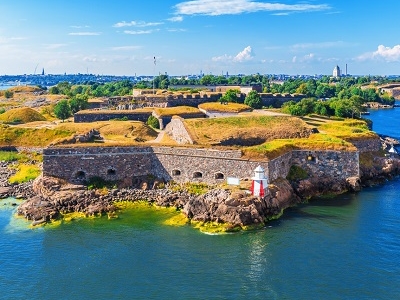 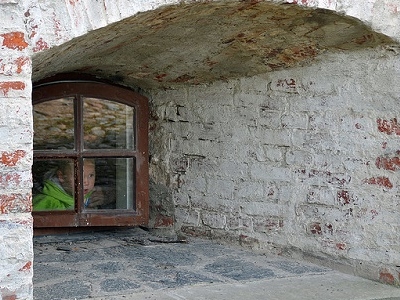 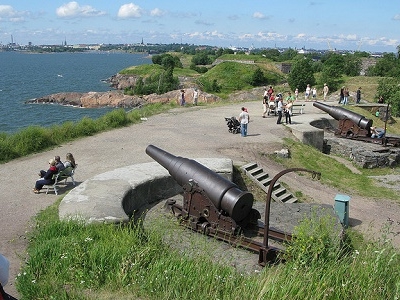 Suomenlinna, until 1918 Viapori (Finnish), or Sveaborg (Swedish), is an inhabited sea fortress built on six islands (Kustaanmiekka, Susisaari, Iso-Mustasaari, Pikku-Mustasaari, Länsi-Mustasaari and Långören), and which now forms part of the city of Helsinki, the capital of Finland. Suomenlinna is a UNESCO World Heritage site and popular with both tourists and locals, who enjoy it as a picturesque picnic site. Originally named Sveaborg (Fortress of Svea), or Viapori as called by Finns, it was renamed Suomenlinna (Castle of Finland) in 1918 for patriotic and nationalistic reasons, though it is still also sometimes known by its original name. In Swedish-speaking contexts, the name Sveaborg is always used.

The Swedish crown commenced the construction of the fortress in 1748 as protection against Russian expansionism. The general responsibility for the fortification work was given to Augustin Ehrensvärd. The original plan of the bastion fortress was strongly influenced by the ideas of Vauban, the foremost military engineer of the time, and the principles of Star Fort style of fortification, albeit adapted to a group of rocky islands.

In addition to the island fortress itself, seafacing fortifications on the mainland would ensure that an enemy would not acquire a beach-head from which to stage attacks. The plan was also to stock munitions for the whole Finnish contingent of the Swedish Army and Royal Swedish Navy there. In the Finnish War the fortress surrendered to Russia on May 3, 1808, paving the way for the occupation of Finland by Russian forces in 1809.

The Swedish Era
Sweden started building the fortress in 1748, when Finland was still a part of the Swedish kingdom. Augustin Ehrensvärd (1710–1772) and his gigantic fortification work on the islands off the town of Helsinki brought the district a new and unexpected importance. In 1703 Peter the Great had founded his new capital, Saint Petersburg, in the furthest-flung corner of the Gulf of Finland. In the approach to it he built the fortified naval base of Kronstadt. Russia soon became a maritime power and a force to be reckoned with in the Baltic Sea.

Under Russian Rule
After taking over the fortress the Russians set about on an extensive building program, mostly extra barracks, but also extending the dockyard and reinforcing to the fortification lines. The long period of peace following the transfer of power was shattered by the Crimean War of 1853–56. The allies decided to engage Russia on two fronts and sent an Anglo-French fleet to the Baltic Sea. For two summers the fleet shelled the towns and fortifications along the Finnish coast. Bombardment of Suomenlinna (then known as Sveaborg or Viapori) lasted 47 hours and the fortress was badly damaged.

Present
No longer very practical as a military base, Suomenlinna was turned over to civilian administration in 1973. An independent government department (The Governing Body of Suomenlinna) was formed to administer the unique complex. At the time there was some debate over its Finnish name, with some suggesting that the old name Viapori be restored, but the newer name was retained.

Geography
The Suomenlinna district of Helsinki consists of eight islands. Five of the islands; Kustaanmiekka (which has the greatest concentration of fortifications), Pikku Mustasaari, Iso Mustasaari, Länsi-Mustasaari and Susisaari are connected by either bridges or sandbars. The unconnected islands are Särkkä, Lonna and Pormestarinluodot.

Here's the our members favorite photos of "Forts in Helsinki". Upload your photo of Suomenlinna!

Going to Suomenlinna? Get answers from our friendly locals

Get in touch with 21 Touristlink members who want to visit Suomenlinna or with Carlos Oribe, Lmbt and 5 others who already have been here.