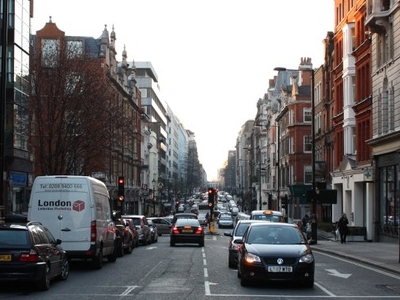 Wigmore Street is a street in the City of Westminster, in the West End of London. The street runs for about 600 yards parallel and to the north of Oxford Street between Portman Square to the west and Cavendish Square to the east.

The well-known Wigmore Hall concert hall is located on north side of Wigmore Street, just to the east of the junction with Welbeck Street. Harley Street and Wimpole Street, famous for their private medical practices, are nearby and have junctions with Wigmore Street. Number 95 Wigmore Street was the location of the original offices of the Beatles' Apple Corps in 1968 prior to their move to Savile Row.

The nearest tube stations are on Oxford Street to the south: Marble Arch at the west end; Bond Street in the centre and Oxford Circus at the east end. The corner of Wimpole and Wigmore Street features in the famous legal case about causing a "nuisance" between neighbours - Sturges v. Bridgman (1879).

Here's the our members favorite photos of "Famous Streets near City of Westminster". Upload your photo of Wigmore Street!

Going to Wigmore Street? Get answers from our friendly locals