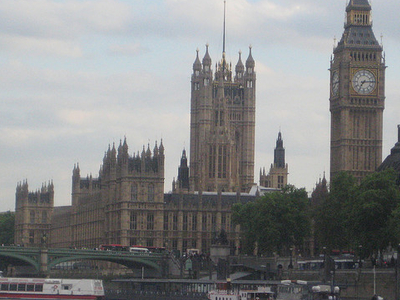 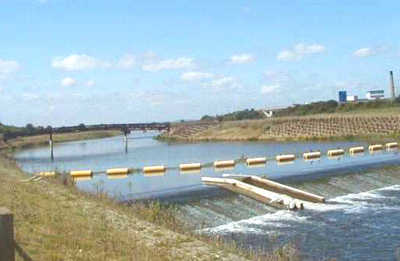 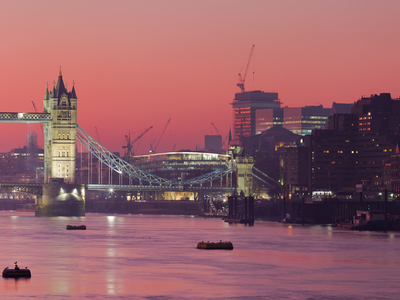 The River Thames flows through southern England. It is the longest river entirely in England and the second longest in the United Kingdom. While it is best known because its lower reaches flow through central London, the river flows alongside several other towns and cities, including Oxford, Reading, Henley-on-Thames, Windsor, Kingston upon Thames and Richmond. The river gives its name to several geographical and political entities, including the Thames Valley, a region of England around the river between Oxford and west London, the Thames Gateway, the area centred on the tidal Thames, and the Thames Estuary to the east of London. The tidal section of the river is covered in more detail under Tideway.

With a total length of 215 miles (346 km), the Thames is the longest river entirely in England and the second longest in the United Kingdom. It rises at Thames Head in Gloucestershire, and flows into the North Sea at the Thames Estuary. It has a special significance in flowing through London, the capital of the United Kingdom, although London only includes a short part of its course. The river is tidal in London with a rise and fall of 7 metres (23 ft); tides reaching up to Teddington Lock. The catchment area covers a large part of South Eastern and Western England and the river is fed by over 20 tributaries. The river contains over 80 islands, and having both seawater and freshwater stretches, it supports a variety of wildlife.

The river has supported human activity from its source to its mouth for thousands of years providing habitation, water power, food and drink. It has also acted as a major highway through the Port of London for international trade, internally along its length and by its connection to the British canal system. The river’s strategic position has seen it at the centre of many events and fashions in British history, earning it a description by John Burns as “Liquid History”. It has been a physical and political boundary over the centuries and generated a range of river crossings. More recently, the river has become a major leisure area supporting tourism and pleasure outings as well as the sports of rowing, sailing, skiffing, kayaking, and punting. The river has had a special appeal to writers, artists, musicians and film-makers and is well represented in the arts. It is still the subject of various debates about its course, nomenclature and history.

Course:
The usually quoted source of the Thames is at Thames Head (at grid reference ST980994). This is about 1200 m (three quarters of a mile) north of the Kemble parish church in southern Gloucestershire, near the town of Cirencester, in the Cotswolds. Seven Springs near Cheltenham, where the river Churn rises, is also sometimes quoted as the Thames' source, as this location is furthest from the mouth, and adds some 14 miles (23 km) to the length. The springs at Seven Springs also flow throughout the year, while those at Thames Head are only seasonal.

The Thames is the longest river entirely in England, but the River Severn, which is partly in Wales, is the longest river in the United Kingdom. However, as the Churn, sourced at Seven Springs is 14 miles (23 km) longer than the Thames (from its traditional source at Thames head), its length 229 miles (369 km) is greater than the Severn’s length 220 miles (350 km). Thus, the Churn/Thames river may be regarded as the longest natural river flow in the United Kingdom.

Catchment area and discharge:
The Thames River Basin District, including the Medway catchment, covers an area of 16,133 square kilometres (6,229 sq mi). The river basin includes both rural and heavily urbanised areas in the east and northern parts while the western parts of the catchment are predominantly rural. The area is among the driest in the United Kingdom. Water resources consist of ground-water from aquifers and water taken from the Thames and its tributaries, much of it stored in large bank-side reservoirs. The Thames itself provides two thirds of London’s drinking water while groundwater supplies about 40 per cent of public water supplies in the total catchment area. Groundwater is an important water source, especially in the drier months, so maintaining its quality and quantity is extremely important. Groundwater is vulnerable to surface pollution, especially in highly urbanised areas.

Wildlife:
Various species of birds feed off the river or nest on it, some being found both at sea and inland. These include Cormorant, Black-headed Gull, and Herring Gull. The Mute Swan is a familiar sight on the river but the escaped Black Swan is more rare. The annual ceremony of Swan upping is an old tradition of counting stocks. Non-native geese that can be seen include Canada Geese, Egyptian Geese, and Bar-headed Geese, and ducks include the familiar native Mallard, plus introduced Mandarin Duck and Wood Duck. Other water birds to be found on the Thames include the Great Crested Grebe, Coot, Moorhen, Heron, and Kingfisher. Many types of British birds also live alongside the river, although they are not specific to the river habitat.

The Thames contains both sea water and fresh water, thus providing support for seawater and freshwater fish. Salmon, which inhabit both environments, have been reintroduced and a succession of fish ladders have been built into weirs to enable them to travel upstream. On 5 August 1993 the largest non-tidal salmon in recorded history was caught close to Boulters Lock in Maidenhead. The specimen weighed 6.5 kg or 14.5 pounds and measured 88 cm or 22 inches in length. The eel is particularly associated with the Thames and there were formerly many eel traps. Freshwater fish of the Thames and its tributaries include brown trout, chub, dace, roach, barbel, perch, pike, bleak, and flounder. Colonies of short-snouted seahorses have also recently been discovered in the river.

Sport:
There are several watersports prevalent on the Thames, with many clubs encouraging participation and organising racing and inter-club competitions.

Here's the our members favorite photos of "Rivers in London". Upload your photo of Thames River!

Going to Thames River? Get answers from our friendly locals

Get in touch with 9 Touristlink members who want to visit Thames River or with Loredana Pantano, Voyageseuropa and 37 others who already have been here.