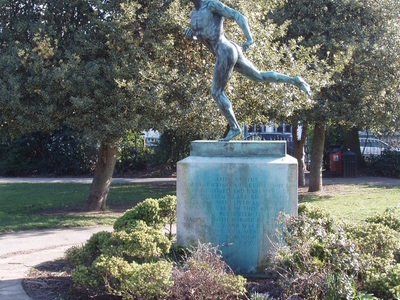 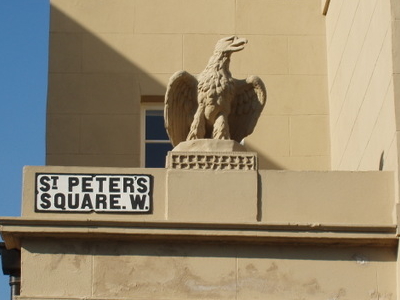 St Peter's Square, in Hammersmith, London, England, is a garden square laid out in the 1820s, just north of The River Thames between the Great West Road (A4) and King Street, within the St Peter’s Square Conservation Area and London Borough of Hammersmith and Fulham.

Locale:
The boundary with the London Borough of Hounslow runs behind the gardens of the houses on the west side of the square where there is a lane called British Grove. St Peter's Church, Hammersmith, the substantial Grecian Ionic structure that was completed in 1829 occupies the eastern corner of the site and is opposite 22 St Peters Square, a Grade II listed architect's studio and office building, that was formerly Island Records headquarters and is now named Island Studios. The houses are a good example of 19th century squares architecture, with paired villas in classical style arranged around a central space. The square today is maintained by residents, in partnership with Hammersmith & Fulham Council.

Garden:
The public garden in the centre of the square is Grade II listed on the English Heritage Register of Historic Parks and Gardens and is 1.5 ha. In 1913, a proposal to build on the garden was abandoned after local protests. The land was bought by the Borough Council and in 1915 the garden was opened to the public. The centre of the garden is occupied by a sculpture, The Greek Runner, by Sir William Blake Richmond, which was erected in 1926.

Here's the our members favorite photos of "Plazas and Squares near Hammersmith and Fulham". Upload your photo of St Peter's Square!

Going to St Peter's Square? Get answers from our friendly locals

Plazas and Squares in England