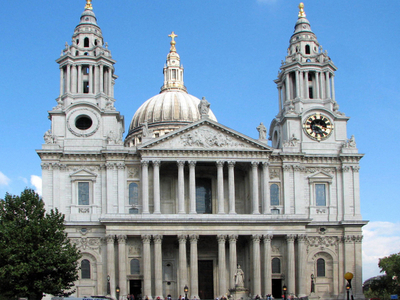 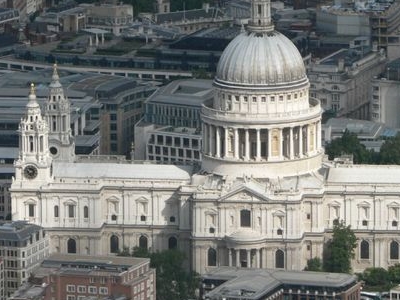 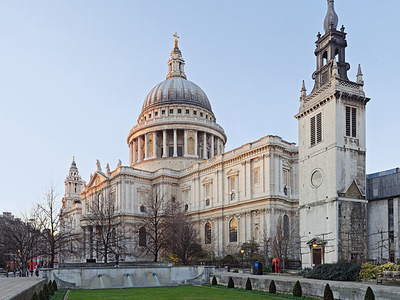 St Paul's Cathedral, London, is a Church of England cathedral, the seat of the Bishop of London and mother church of the Diocese of London. It sits at the top of Ludgate Hill, the highest point in the City of London. Its dedication to Paul the Apostle dates back to the original church on this site, founded in AD 604. The present church, dating from the late 17th century, was designed in the English Baroque style by Sir Christopher Wren. Its construction, completed within Wren's lifetime, was part of a major rebuilding programme which took place in the city after the Great Fire of London.

The cathedral is one of the most famous and most recognisable sights of London, with its dome, framed by the spires of Wren's City churches, dominating the skyline for 300 years. At 365 feet (111 m) high, it was the tallest building in London from 1710 to 1962, and its dome is also among the highest in the World. In terms of area, St Paul's is the second largest church building in the United Kingdom after Liverpool Cathedral.

St Paul's Cathedral occupies a significant place in the national identity of the English population. It is the central subject of much promotional material, as well as postcard images of the dome standing tall, surrounded by the smoke and fire of the Blitz. Important services held at St Paul's have included the funerals of Lord Nelson, the Duke of Wellington, Sir Winston Churchill and Margaret Thatcher; Jubilee celebrations for Queen Victoria; peace services marking the end of the First and Second World Wars; the wedding of Charles, Prince of Wales, and Lady Diana Spencer, the launch of the Festival of Britain and the thanksgiving services for the Golden Jubilee, the 80th Birthday and the Diamond Jubilee of Elizabeth II. St Paul's Cathedral is a busy working church, with hourly prayer and daily services.

Memorials:
The cathedral has a very substantial crypt, holding over 200 memorials, and serves as both the Order of the British Empire Chapel and the Treasury. The cathedral has very few treasures: many have been lost, and in 1810 a major robbery took almost all of the remaining precious artefacts. Christopher Wren was the first person to be interred, in 1723: on the wall above his tomb in the crypt is written, "Lector, si monumentum requiris, circumspice" (Reader, if you seek his monument, look around you).

St Paul's is home to other plaques, carvings, statues, memorials and tombs of famous British figures including:

Organ:
The organ was commissioned in 1694: the current instrument is the third-largest in Great Britain in terms of number of pipes (7,266 pipes), with 5 manuals, 189 ranks of pipes and 108 stops, enclosed in an impressive case by Grinling Gibbons.

Tourism:
In 2010, new touchscreen multimedia guides were also launched. These guides are included in the price of admission. Visitors can discover the cathedral’s history, architecture and daily life of a busy working church with these new multimedia guides. They are available in 12 different languages: English, French, German, Italian, Spanish, Portuguese, Polish, Russian, Mandarin, Japanese, Korean and British Sign Language (BSL). The guides have fly-through videos of the dome galleries and zoomable close-ups of the ceiling mosaics, painting and photography. Interviews and commentary from experts include the Dean of St Paul’s, conservation team and the Director of Music. Archive film footage includes major services and events from the cathedral's history.

Here's the our members favorite photos of "Churches near City of London". Upload your photo of St Paul's Cathedral!

Going to St Paul's Cathedral? Get answers from our friendly locals

Get in touch with 4 Touristlink members who want to visit St Paul's Cathedral or with Ezra F, Paula López Alted and 13 others who already have been here.