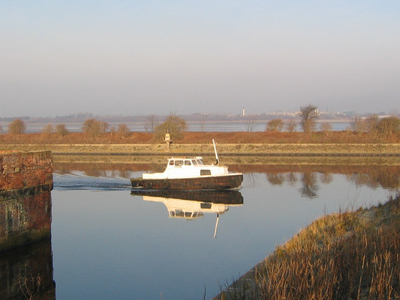 The Port of Runcorn is in the town of Runcorn, Cheshire, England. It is situated to the west of a point where the River Mersey narrows, known as Runcorn Gap. Originally opening directly into the Mersey, with the building of the Manchester Ship Canal, it now links with this canal.

Until the 18th century, the major port in northwest England was Chester. However silting of the River Dee prevented access to Chester and in 1708 Thomas Steers was commissioned to build the first wet dock in Liverpool. By 1710 Liverpool had become the third largest port in the country contributing £50,000 in customs revenue. During the early-mid 18th century the major materials passing through Liverpool were salt from Cheshire and coal from the Lancashire coalfields. Other important materials were building stone, roofing slates from North Wales, and ores, particularly copper ore, from Anglesey. Later came imports of cotton, timber and grain to Manchester, and potters' materials to The Potteries. These materials were carried mainly by flat-bottomed barges known as Mersey flats. In the mid-Mersey area communications were being improved by the development of inland waterways, including the Sankey Canal from St Helens to Warrington which was completed in 1757, the Mersey and Irwell Navigation, the act for which achieved Royal Assent in 1720, and the Bridgewater Canal from Manchester to Runcorn, which opened throughout its length in 1776.

Here's the our members favorite photos of "Ports and Marinas near Runcorn". Upload your photo of Port of Runcorn!

Going to Port of Runcorn? Get answers from our friendly locals

Ports and Marinas in England

Ports and Marinas in United Kingdom