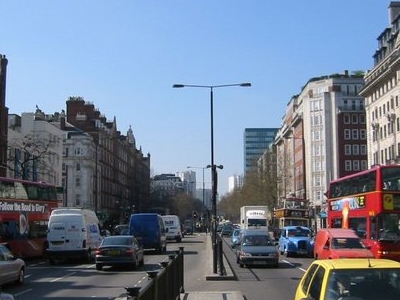 Marylebone Road is an important thoroughfare in central London, within the City of Westminster. It runs east-west from the Euston Road at Regent's Park to the A40 Westway at Paddington. The road which runs in 3 lanes in both directions, is part of the London Inner Ring Road and as such forms part of the boundary of the zone within which the London congestion charge applies.

As part of the Ring Road and a feeder route to the A40 (and hence the M40 motorway) (to the west) and the A5 and M1 motorway (to the north) much of the traffic leaving central London for the Midlands and the North of England travels on this road. It is frequently heavily congested.

Tourism:
One of London's principal tourist attractions lies on Marylebone Road - Madame Tussauds. It is also the location of the Royal Academy of Music and the former "Great Central Hotel", now renamed The Landmark London.

Here's the our members favorite photos of "Famous Streets near City of Westminster". Upload your photo of Marylebone Road!

Going to Marylebone Road? Get answers from our friendly locals