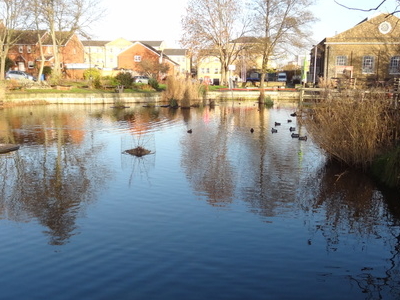 Lavender Pond is a 2.5 acre local nature reserve in Rotherhithe in the London Borough of Southwark. It is owned by Southwark Council and managed by the Trust for Urban Ecology. The nature reserve has an area of woodland as well as the pond.

The site is in the northern end of the former Surrey Commercial Docks. The pond is a small part of the much larger former Lavender Pond, where timber was floated to prevent it drying and cracking. In 1928 the entrance to the pond was blocked when the Port of London Authority built the Pumphouse on the site to control the water levels in Surrey Docks. In 1970 the Docks were closed. The area became neglected and the pond was filled in, but in 1981 the pond was re-created as part of a nature reserve.

Here's the our members favorite photos of "Nature Reserves near London Borough of Southwark". Upload your photo of Lavender Pond!

Going to Lavender Pond? Get answers from our friendly locals