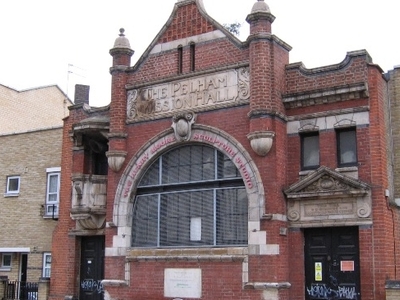 Lambeth Walk is a street in Lambeth, London, England, off Lambeth Road. It was at the heart of a working class residential area and there was a street market. The area was originally developed with Wells and a Recreation Ground, with houses following in the 19th century. After some bomb damage during the Blitz in World War II on 18 September 1940, the area became rather run down and was subsequently rebuilt. Some older buildings are still present, including the Henry Moore Sculpture Studios, image adjacent.

Lambeth Walk starts as a turning off the Lambeth Road (A3203) between Kennington Road and the main railway line into London Waterloo Station. On the junction with Lambeth Road is the former Lambeth Walk pub. On the opposite corner is the modern hall of the Lambeth Mission church (now shared with St Mary's Church) and International House, now a hall of residence of the University of Westminster.

Here's the our members favorite photos of "Famous Streets near London Borough of Lambeth". Upload your photo of Lambeth Walk!

Going to Lambeth Walk? Get answers from our friendly locals