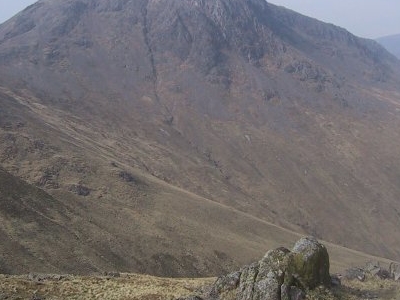 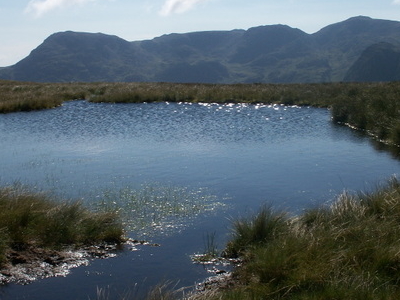 Kirk Fell is a fell in the Western part of the English Lake District. It is situated between Great Gable and Pillar on the long ring of fells surrounding The Valley of Ennerdale, and also stands over Wasdale to the south. However, it is separated from its two higher neighbours by the low passes of Black Sail and Beck Head, giving it a high relative height and making it a Marilyn, the thirteenth highest in the Lake District.

The direct ascent up the south western slope from Wasdale Head is backbreakingly steep and the subject of an amusing drawing by Wainwright. Usual ascents are by one of the aforementioned passes; alternatively one may climb Kirk Fell as part of the Mosedale Horseshoe, a walk on the fells surrounding Mosedale, a side-valley of Wasdale.

The Western Fells occupy a triangular sector of the Lake District, bordered by The River Cocker to the north east and Wasdale to the south east. Westwards the hills diminish toward the coastal plain of Cumberland. At the central hub of the high country are Great Gable and its satellites, while two principal ridges fan out on either flank of Ennerdale, the western fells in effect being a great horseshoe around this long wild valley. Kirk Fell is the first on the southern arm. The main watershed runs broadly westwards from Great Gable, dividing the headwaters of Ennerdale and Wasdale. The main fells in this section are Kirk Fell, Pillar, Scoat Fell, Haycock and Caw Fell, followed by the lower Lank Rigg group.

Here's the our members favorite photos of "Peaks or Summits in Lake District National Park". Upload your photo of Kirk Fell!

Going to Kirk Fell? Get answers from our friendly locals

Peaks or Summits in Cumbria