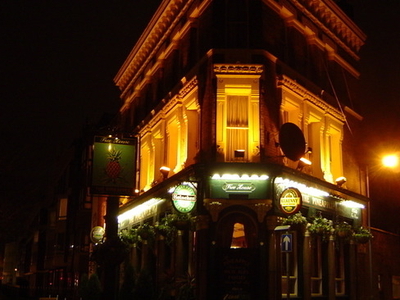 Hercules Road runs north from Lambeth Road near Lambeth Palace, on the site of Penlington Place, in the London Borough of Lambeth, south London, England. The road is named after Hercules Hall, which was built by and was the home of Philip Astley (1742-1814), riding instructor, horse-trainer, and acknowledged as the inventor of the modern circus. Performing nearby in an open field behind the present site of St John's Church, Waterloo, Astley realised the advantages of riding in a circle, and thus invented the circus ring. He was a principal among the many performers who made Lambeth a popular entertainment resort at that time.

Historically, Hercules Road is most well known for a former resident, the poet and visionary artist William Blake (1757-1827), who lived in a large house 13, Hercules Buildings and his address was Mr Blake Engraver, Hercules Buildings, Westminster Bridge. There is a series of mosaics inspired by Blake in a tunnel nearby. The site is marked with a plaque. Hercules Road was a location for the film Passport to Pimlico. The Pineapple public house is located at 53–55 Hercules Road.

Here's the our members favorite photos of "Famous Streets near London Borough of Lambeth". Upload your photo of Hercules Road!

Going to Hercules Road? Get answers from our friendly locals